Historical Background
After their disaster at the Caudine Forks in 321 BC, the Romans used the next five years of the truce with the Samnites to rebuild their military strength. Hostilities broke out once more in 316 BC and the Romans marched south into Samnium under the Dictator Lucius Aemilius and his Master of Horse Marcus Fulvius. They initially captured the cities of Luceria and Satricum before placing Saticula under siege.
A Samnite army arrived to lift the siege and they attacked the Roman camp in conjunction with a sortie out of Saticula by some armed occupants. The Roman camp was being assaulted from both sides, but the Samnites struggled to combine their strength as Aemilius had positioned his camp where it could not easily be outflanked. Aemilius first drove the inhabitants of Saticula back into their city before turning on the main Samnite army and forcing them back into their camp after a long hard struggle.
The Samnite army stole away under cover of darkness leaving the Romans to continue the siege.
The stage is set. The battle lines are drawn and you are in command. Can you change history? 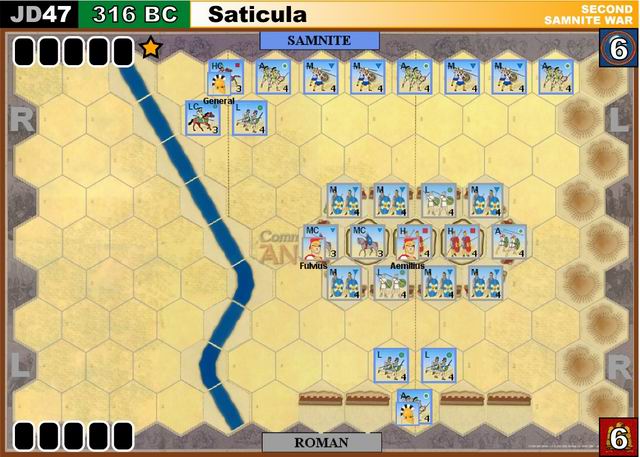 The rampart tiles in the A hex row (Saticula city walls) and the hill hexes are impassable.

The 3 Samnite units and leader in and adjacent to hex A9 will retreat and evade towards the Roman board edge.