Historical Background
The Samnite commander, Gaius Pontius, hearing that the Roman army was located near Calatia, sent soldiers disguised as shepherds with orders to give the same story which was that the Samnites were besieging Lucera in Apulia. The Roman commanders, completely taken in by this ruse, decided to set off to give aid to Luceria. Worse, they chose the quicker route though the Caudine Forks. The area round the Caudine Forks was surrounded by mountains and could be entered only by two defiles. The Romans entered by one but when they reached the second defile, they found it barricaded. They returned at once to the first defile only to find it now securely held by the Samnites. At this point the Romans, according to Livy, fell into total despair knowing the situation was quite hopeless.
The stage is set. The battle lines are drawn and you are in command. The rest is history. 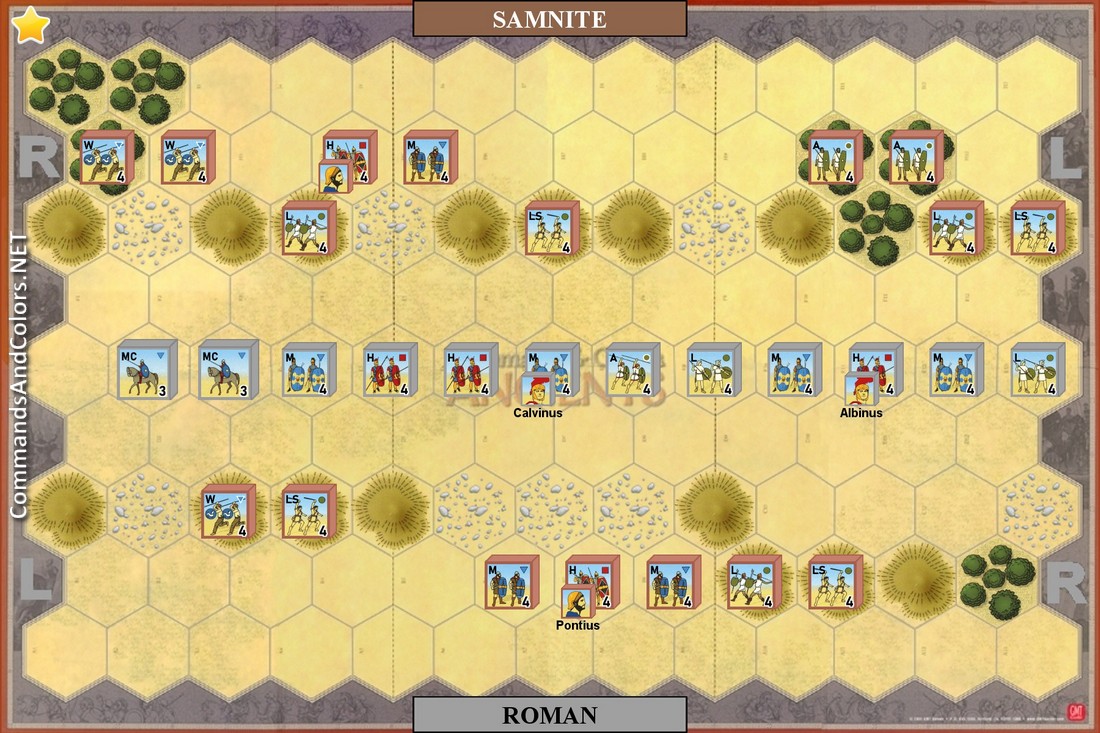 SpicyC replied the topic: #4067 9 months 4 weeks ago
Battle ended 6 - 1 for the Samnites. The Romans were not able to break out of the confines of the hills, as the Samnites plugged the broken ground holes while raining ranged fire from the impregnable hills.

We played it with the following two interpretations:

1) Roman Units have to retreat *directly* left or right (no upward or downward movement).
2) Romans *can* attack from hill to hill, or from the "sides" of hills or the "backs" of hills (front behind defined as towards center).

Mark-McG wrote: I looked at playing this today, but it simply seemed too hard, and the retreats too odd.
Not even sure this was an actual battle, wikipedia describes it as "an event"
en.wikipedia.org/wiki/Battle_of_the_Caudine_Forks


It seems you are right Mark.
This is also confirmed in podcast which I was recently listening to (The History of Rome).
itunes.apple.com/us/podcast/the-history-of-rome/id261654474 - episode 15b I think.

Mark-McG replied the topic: #2633 4 years 2 months ago
I looked at playing this today, but it simply seemed too hard, and the retreats too odd.
Not even sure this was an actual battle, wikipedia describes it as "an event"
en.wikipedia.org/wiki/Battle_of_the_Caudine_Forks
Read More...