SUPPRESSION OF THE KHASHAS - 274 BC

Historical Background
"Though he was hailed as 'Slayer of Enemies,' Chandragupta's son Bindusara was friendly with the Hellenic world and was known to have had a taste for Greek figs, wine, and philosophy. Little is known, however, about the military conquests of Bindusara. He is generally thought to have consolidated (if not expanded) his father's empire, but from the chronicles of Taranatha, we are told that Bindusara 'destroyed kings and nobles of about sixteen cities' in the rebellious Khasa rajya, or realm of the Khashas. The Khashas, whose settlements in the former kingdom of Puru extended from Jhelum to the west of Kashmir, were likely independant principalities united by clan or tribal connections who chafed at Mauryan imperial power.
Chanakya was certainly older by this time, but probably still active; Bindusara retained him from his father's court.
(From the GBOH Chandragupta module by Stephen R. Welch).
The stage is set. The battle lines are drawn and you are in command. Can you change history? 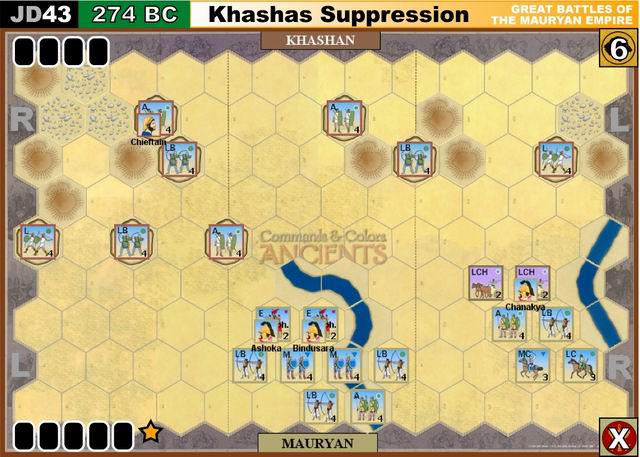 Victory
Khashan - 6 Banners or avoid a Mauryan victory.
Mauryans - All camp tiles captured before the last card of the deck is drawn.
Do not re-shuffle the cards when "I am Spatacus" is played.

Special Rules
The rivers are fordable with no battle dice reductions.

When a Mauryan unit ends its turn on a camp hex, it is considered captured and is removed from play.