Historical Background
"This scenario is based on events from the play Mudrarakshasa (9th century CE), which was 'probably based on events which actually occurred' (according to Bhargava, at least). And it gives us an excellent opportunity to introduce the Indian military camp to the game.
The politival background is certainly plausible. Having won power with the help of independent tribes and principalities, Chandragupta promptly evades the pre-war promises he made them. Betrayed, the tribal chieftains rise against Chandragupta. The revolt is led by the son of Parvataka, named Malayaketu, with the help of five other chiefs and an ex-minister of the Nanda regime named Rakshasa.
Chanakya gets to work, employing 'other political means' against the rebels, e.g. he has several of Malayaketu's allies poisoned and uses guile to sow dissension among the tribes. weakened, the rebels are then attacked in camp, at night.
HISTORICAL NOTE: The sources suggest that this was a Chanakya-only affair, and probably too politically 'hot' for Chandragupta to get tainted with. So we've put Chanakya in command..."
(From the GBOH Chandragupta module by Stephen R. Welch).
The stage is set. The battle lines are drawn and you are in command. Can you change history? 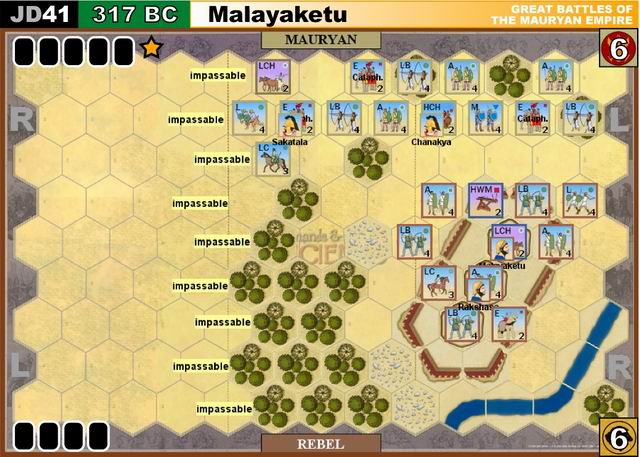 The blank board section, including half hexes, is not in play. Cards for this section may be used for one of the other sections when played.

Night Rules - missile fire has a maximum range of 2 hexes and the Rally order only effects units stacked with a leader.

Surprise - on the first Mauryan turn that players attacks gain +1 combat dice and the Nandans will battle back with -1 dice, and may not use "First Stike".

The Mauryan player gains a victory banner for each camp hex that one of his/her units currently occupies.

SpicyC replied the topic: #3613 1 year 9 months ago
Lots of back and forth, centered around the forward rampart wall. Ended up 6-5 Mauryan.
Read More...