Historical Background
"According to Grainger, after his stalemate with Antigonus in 308, Seleucus conquers Bactria and then proceeds to Gandhara on India's western frontier. Marching through Oxyartes' satrapy of Paropamisadai and then down the Kabul River, he crosses at the confluence of the Indus somewhere in the vicinity of modern Attock in Pakistan. On the east bank of the Indus Chandragupta confronts him. With his back to the river, Seleucus fought to what was possibly a tactical draw, but it was a strategic loss. Having gambled so far from home but failing to achieve a victory, Seleucus is gifted '500' war elephants from the Mauryan emeror in exchange for the surrender of his possessions in the Indus valley, Arachosia, and Gedrosia. Sources suggest that the cession of these territories were treated as the dower of Seleucus' daughter in her marriage to Chandragupta's son, Bindusara.
Seleucus' leaders were Sibyrtius, Satrap of Arachosia and Gedrosia, Polyarchus, who had defected from Antigonus when Seleucus made his big appearance, and Patrocles, who held out against Demetrius while Seleucus was in the east fighting Nicanor.
The battle with Seleucus was probably Chandragupta's last major engagement. He inclined towards Jainism in later life, abdicating the throne to his son Bindusara. Chandragupta died in his early fifties, in 293 BC."
(From GBOH Chandragupta module by Stephen R. Welch).
The stage is set. The battle lines are drawn and you are in command. The rest is history. 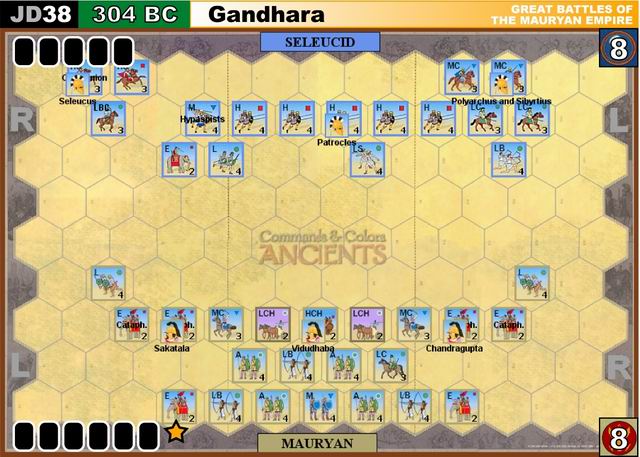 The Seleucid Hypaspists may ignore 1 crossed sword and 1 retreat banner result. They may move 2 hexes if they don't battle.

The Seleucid leader marked as "Polyarchus and Sibyrtius" acts as a single leader for all game purposes.