Historical Background
"After overthrowing the Nandas, Chandragupta had to justify his new dynasty by proving it able to secure the protection of the people against foreign invasion by the Yavana-the Greeks. His opportunity presented itself out in the western province of Gandhara, in the city-state called Takshashila.
Takshashila (aka 'Taxila' in Greek) was at the time under the joint rule of the Indian King Ambhi, who had allied himself years earlier with Alexander against his rival King Puru ('Porus' of Hydaspes fame), and the Thracian general Eudamus, a successor of Phillippus. When Eudamus treacherously has Puru murdered, a native revolt begins.
Shrewdly, Chandragupta transforms the revolt into an organised military action against Takshashila. Not only is Takshashila garrisoned by the hated Yavana-Greek and Macedonian mercenaries-but it is strategically important as a trade-route crossroads, connecting the Mauryan home kingdom of Magadha with Bactria. Seizing Takshashila would extend the young Mauryan empire out to Indian's western frontier.
Eudamus is not committed to this battle-his joint rule with Ambhi was meant to be temporary, but his permanent appointment as satrap was never made. when things become 'too hot,'therefore, Eudamus throws in the towel. He quits India to later help Eumenes in his fight against Antipater. The Greek officers remaining are put to the sword by the Mauryan troops, and Chandragupta assigns Chanakya-born in Takshashila-as its viceroy.
HISTORICAL NOTE: Sources differ on whether the expulsion of the Greeks (Eudamus) occurred before or after the conquest of the Nandas. We choose to follow the Mahavamsa Tika, which that states that Chanakya was assigned to govern Takshashila after the Nanda's defeat. Our thinking is that chandragupta would have had to first secure the throne in Magadha-and Magadha's military machine-before engaging in a conquest of Gandhara."
(From the GBOH Chandragupta module by Stephen R. Welch).
The stage is set. The battle lines are drawn and you are in command. The rest is history. 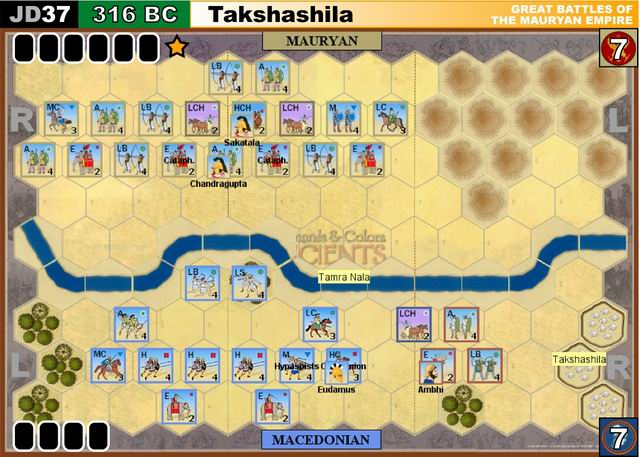 The hills and the city of Takshashila (camp tiles) are impassable.

The Macedonian Greek block elephant units are each worth 2 victory banners.

The Macedonian Hypaspists may ignore 1 crossed sword and 1 retreat banner result. The may move 2 hexes if they don't battle.