Historical Background
"Though Ugrasena Nanda apparently was a great conqueror and able ruler, his rich and powerful sons were not.As Ugrasena grew older, his sons' greed and corruption became intolerable. Using this as well as the Nanda's lowness of birth to drum up popular support for their rebellion, Chanakya and Chandragupta began to broaden their anti-Nandan coalition. Among the freedom-loving clans and princes of Punjab Sindh, most of whom  had given stout resistance to the foreign invader Alexander, they find the military support they had been seeking.
After the failed attack on Pataliputra, the banner of revolt was raised again, this time with the help of the chieftain Parvataka and his brother Vairodhaka. According to legend, Chanakya was the commander of the chariot corps for Chandragupta's army.
The Nandan troops fought vigorously under the command of Bhadrasala. The eldest of the Nandan princes was called Sahalya; he and his brothers Chandramas and Dhana, who all shared sovereign power with hin, perished (they were most likely put to the sword). Parvataka apparently died in this battle."
(From the GBOH Chandragupta module by Stephen R. Welch).
The stage is set. The battle lines are drawn and you are in command. The rest is history. 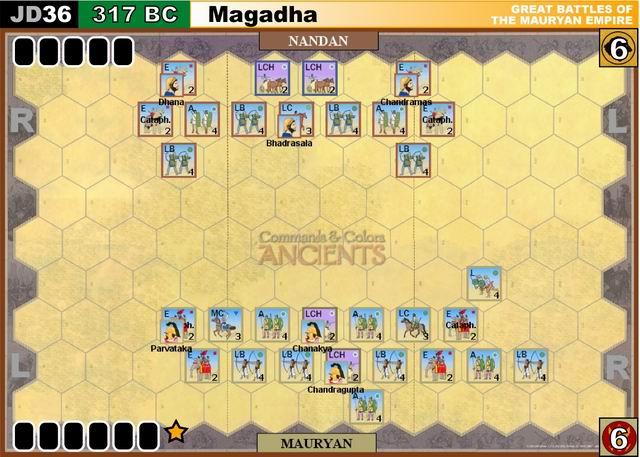