Historical Background
"The kingdom of Magadha was originally brought under rule by a prince of the Paurava family (of 'Porus' fame). The dynasty, known as Haryanka, came to an end when its last king was murdered by a userper known today only as Shishunaga. Shishunaga had a successful career, ruling over several kingdoms in what could legitimately be called India's first empire, but his Karma (one could say) eventually caught up with him. According to Curtius, the bastard son of the last prince of the Haryanka-known as Ugrasena Nanda-thrust a dagger into Shishunaga's throat, then promptly had the royal children murdered. The Nanda dynasty was born.
Born of a Sudra (plebian or labor-caste) courtesan, Nanda was something of a novus homo who waged war against the aristocracy, exterminating many of the Kshatriya (warrior caste) clans in his growing empire. In doing so he garnered the relentless hostility of politically-minded Brahmins such as Chanakya, an exile from the Nandan court who quickly rose to the occasion and began plotting to overthrow the government in Gandhara. Chanakya flees to Takshashila where he meets Chandragupta, and he and his young protege begin recruiting mercenaries and other armed malcontents for a rebellion.
This inaugural battle did not go well for Chandragupta, as he and his insurgents brashly attacked the capital without having consolidated their power base among the 'hereditary' (i.e. Maula) military class. By all accounts they were defeated, forcing them to regroup in the countyside to build up their military strength and political support.
From Jain legend, Chanakya was a charioteer in the initial uprising against the Nandas. As Chandragupta was quite yound here, Chanakya was likely to have been the overall commander. It is not known who commanded the Nandas, but we opt here to give the assignment of mopping up this insurrection to the Nanda's able general Bhadrasala, who enjoyed some respect as Mahasenapati (commanding general) , even among his adversaries. Chandramas and Dhana were the younger of Ugrasena's sons: we've given them commands here appropriate for Nandan princes."
(From the GBOH Chandragupta module by Stephen R. Welch).
The stage is set. The battle lines are drawn and you are in command. The rest is history. 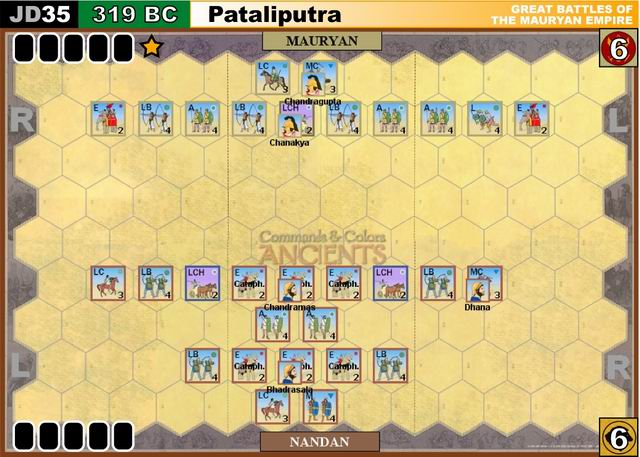 The battle opened up with a volley of ranged fire from the Mauryan side, in which Chanakya proved a fearsome combatant, killing an enemy Light Chariot in a single roll. The Nandas reacted with a concerted effort to bring down the elephants on the Mauryan flanks, pushing them back with ranged fire. In the center, Chandramas moved forward in an effort to both push Chanakya back and compress the Mauryan center, but was eventually rebuffed and forced to flee by a combination of ranged fire and Auxilia attacks.

Meanwhile, on the Nanda right, Dhana pushed forward along with a Light Chariot group, succeeding in destroying the Light Infantry and the wounded Elephant troop on the Mauryan left. The Nanda effort to block off Dhana's retreat was foiled by a First Strike, and both attacking mounted units escaped largely unscathed. In response, Chanakya moved to the left flank to try and chase down the retreating units. Chandragupta entered the fray, attacking an Elephant group that had moved to the Nanda right and annihilating it.

However, with no leaders and no command to support it, the Mauryan center was pushed to the edge of the board by Chandramas, who by now had regrouped with foot soldiers and pushed forward in a fearsome assault. With the Mauryan center withering and defeat looming, Chanakya and Chandragupta pushed forward in a last minute attempt to close the battle by defeating the now weakened Dhana and the mounted units on the Nanda right. Fate was on the side of the Mauryans; a lone Light Bowman division in the Mauryan center refused to die to Chandramas' assault, giving Chandragupta enough time to land the finishing blow on Dhana's Medium Cavalry and Light Chariot troops.