Historical Background
After defeating and Killing Eumenes at the battle of Gabiene in 317 BC, Antigonus turned back west to confront an alliance of Ptolemy, Lysimachus amd Cassander. The fighting was inconclusive, but during the conflict, Ptolemy's protoge Seleucus, slipped east and reclaimed his satrapy of Babylon. Antigonus made peace with the alliance in 311BC so that he could retake the east from Seleucus, but after campaigning from 310 to 308 BC he was finally defeated by Seleucus and returned west. This left Seleucus in peace to expand and consolodate his eastern empire culminating in a truce with the Mauryan empire by which he received 500 Indian war elephants.
Antigonus re-started the was against the alliance in 307 BC. His son Demetrius first expelled Cassander from Greece and then attempted to do the same to Ptolemy in Cyprus and Rhodes. Meanwhile, with Antigonus focused in the Mediterranean, Lysimachus invaded Asia Minor. Antigonus returned with his far larger army to crush Lysimachus, but Lysimachus was then reinforced by Seleucus along with his war elephants. Antigonus had the edge in infantry while Seleucus and Lysimachus had a cavalry advantage but they had a massive elephant superiority. The army of Antigonus was crushed and he was killed fighting. Demetrius fled to Greece while Lysimachus and Seleucus divided up Antigonus's Asian territories between them.
(Scenario is based on the GBOH "Diadochoi" module by Mark Herman and Richard Berg)
The stage is set. The battle lines are drawn and you are in command. Can you change history? 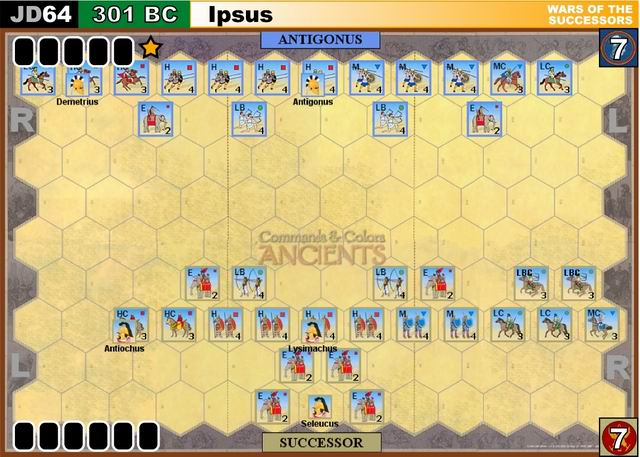