Historical Background
Following the defeat of Craterus by Eumenes, Antipater, the regent of Macedonia, appointed Antigonus as his new general to carry the war into Asia Minor against Eumenes. The two generals met in the summer of 317BC in the lands of the Paraetaceni near Susa.
The battle started with a cavalry charge by Peithon, but this was beaten off by Eumenes' heavy cavalry after drawing light cavalry reinforcements from his left flank. The two heavy phalanxes then clashed in the centre with Eumenes' elite Silver Shields, old veterans of Alexander the Great, beating the less experienced Antigonid phalanx. The battle seemed won for Eumenes until Antigonus charged his heavy right wing cavalry into the flank of the now exposed enemy heavy infantry.
Eumenes' heavy troops formed square and withdrew prompting Antigonus to declare victory, but with far greater losses, he was in no position to pursue and the battle ended in what was in reality a draw. The contest would be decided the following year at the battle of Gabiene.
(Scenario is based on the GBOH "Diadochoi" module by Mark Herman and Richard Berg)
The stage is set. The battle lines are drawn and you are in command. Can you change history? 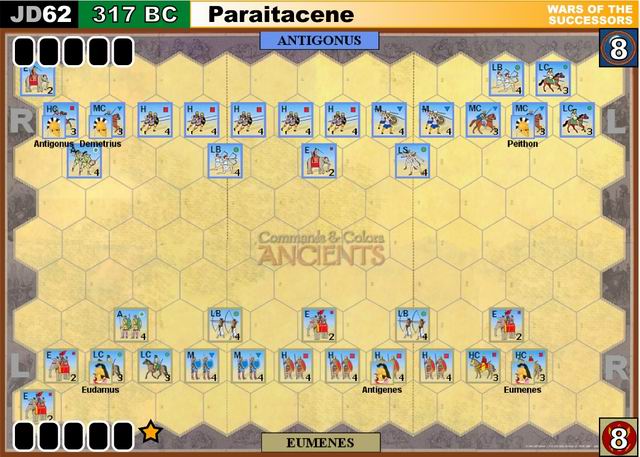 Victory
8 Banners
If a turn ends at 6 or 7 banners all, the game ends as a draw.

Special Rules
The Eumenid Heavy infantry unit in hex B8 (Silver shields) has 5 blocks and may ignore 1 crossed sword and 1 retreat banner.

The Antigonid medium infantry units have 8 blocks each and may ignore 1 retreat banner if they have 5 or more blocks remaining.