Historical Background
After the defeat of Craterus at the Hellespont by Eumenes, Antipater appointed Antigonus as his new commander in Asia to oppose Eumenes and Alcetas. He gave him 8,500 Macedonian infantry and half his cavalry and elephants. Antigonus first proceeded against Eumenes who was encamped in the favourable cavalry country of Orcynia in Cappadochia. Eumenes had 20,000 infantry and 5,000 cavalry but the majority of his troops were locally raised auxillaries.
Antigonus had with him 10,000 infantry and 2,000 cavalry consisting mostly of good quality Macedonian troops. He also had 30 Elephants. The battle began fiercely and Eumenes was initially winning, but Apollonides, one of his cavalry generals, defected to Antigonus during the battle and this shock event caused his army to collapse.
Eumenes lost 8,000 men killed with many of the remainder joining Antigonus' army. Eumenes fled to the fortress of Nora while Antigonus, with his newly expanded army headed off to seek out Alcetas. Eumenes was not out the fight though and he would return two years later to battle Antigonus once again at Paraitacene.
The stage is set. The battle lines are drawn and you are in command. The rest is history. 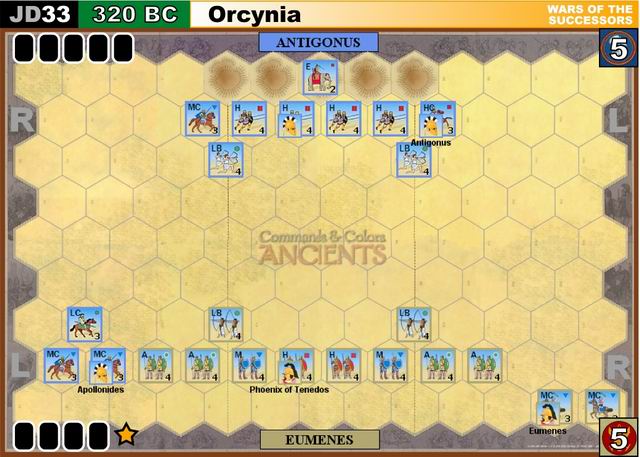 Special Rules
The Antigonid leader Apollonides and the 3 cavalry units on and adjacent to his hex may not be attacked by the Eumenes units until after a turn in which one or more of them has been ordered. They may not be ordered on the first turn.