Historical Background
Antigonus, having defeated Eumenes in battle at Orcynia in Cappadochia, set off on a forced march of 290 miles in a week to Cretopolis to catch Alcetas by surprise. Antigonus had 40,000 infantry and 7,000 cavalry against 16,000 infantry and 900 cavalry of Alcetas.
The arrival of Antigonus on the heights above the plain where his army was camped did indead come as a shock to Alcetas. To give his troops time to form up Alcetas led his cavalry in a furious charge up the hill, but the downward assault by the masses of Antigonid cavalry, infantry and elephants swept away the army of Alcetas and he fled the field with his personal guard and Psidian allies only to be killed by them later.
The stage is set. The battle lines are drawn and you are in command. The rest is history. 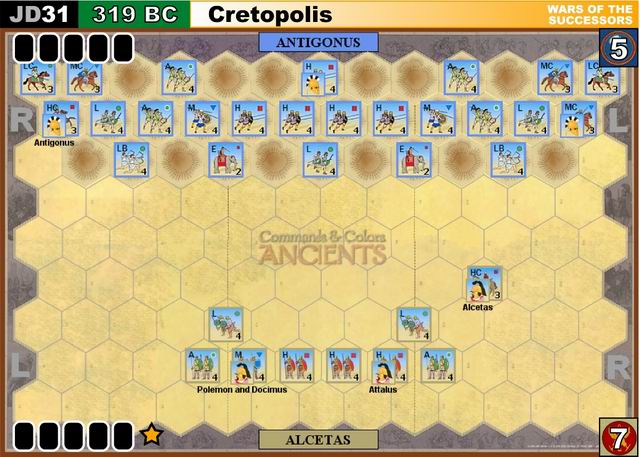 Special Rules
Alcetas' army was caught by surprise and to give his troops time to form up he charged the enemy immediately. If the Successor player wishes to go 1st he/she must take a mounted charge card in their starting deck, play it on their 1st turn and attack with their heavy cavalry unit. The Successor player may forgoe this option but the Antigonid playet will then take the 1st move of the game and Alcetas plus his heavy cavalry are set up in hex B10.

The Successor leader in hex B5 represents both Polemon and Docimus. It acts as a single leader unit in all respects.