Historical Background
The growing power of Antigonus led Ptolemy, with Seleucus in his protection, to invade Syria. Antogonus, who was dealing with a disgruntled Cassander in the west, dispatched his son Demetrius to deal with the situation.
Ptolemy deployed 18,000 infantry and 4,000 cavalry against Demetrius' army of 12,500 infantry, 4,400 cavalry and 43 elephants. Ptolemy posted his heavy cavalry on his right behind a sceen of archers and Anti-elephant spikes (Caltrops) to counter the elephants and heavy cavalry of Demetrius.
The battle started with a hard clash of the two strong cavalry wings, but the battle turned in ptolemys favour when Demetrius' elephants fell foul of the spikes and archers, with most being captured. This caused his cavalry to flee and in turn the infantry fled as well. Demetrius lost 500 men killed and 8,000 prisoners along with his elephants. Ptolemy was able to occupy Syria and Seleucus to recover Babylon.
The stage is set. The battle lines are drawn and you are in command. The rest is history. 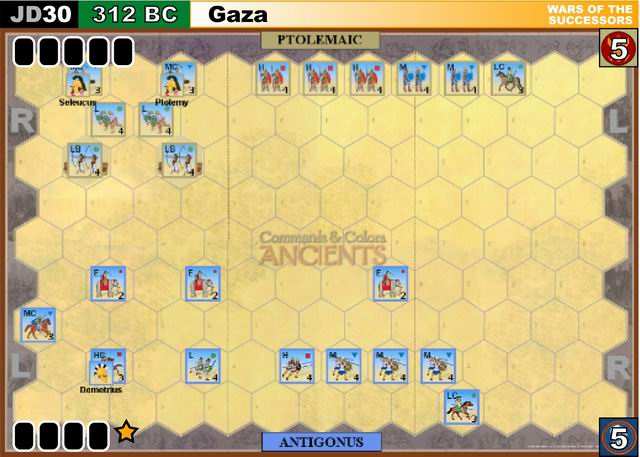 Special Rules
Ramparts represents caltrops. No unit may cross a clatrop hexside. If an elephant unit enters hexes G1, G3, G5, F1 to F4 it is attacked with 1 combat dice. The roll is made for each hex entered on every occassion at the instant of entry, including during a retreat. A red square or retreat result on the dice will finish the elephants turn on implementation of the result, although a retreat onto