Historical Background
Following the Death of Alexander the Great, Perdiccas assumed the role of Regant of the empire. This did not sit well with the other contenders for the throne. Ptolemny in Egypt, in open defiance of Perdiccas, stole the body of Alexander, while Antipater and Craterus in Macedonia marched on Asia minor. Perdiccas went to deal with Ptolemy, where he was murdered by his own officers, while he assigned Eumenes, Alexander's former secretary, and
Neoptolemus to stop the others crossing into Asia. Neoptolemus, jealous of Eumenes overall command position, rebelled but was defeated by Eumenes and fled with a few hundred cavalry to Craterus. Antipater headed south to help Ptolemy while he assigned Craterus to deal with Eumenes. Eumenes had 20,000 infantry and 5,000 cavalry versus Craterus with a similar amount of infantry but only just over 2,000 cavalry. Eumenes, being a Greek, was wary that his Macedonian troops might defect to the popular Macedonian hero Craterus, and so he held his infantry back hoping they would not see Craterus before he could win the battle with his cavalry. His plan worked and his cavalry were victorious on both flanks with Craterus and Neoptolemus both being killed.
The Macedonian infantry of Craterus agreed to join Eumenes, but they slipped away at night to join Antipater
The stage is set. The battle lines are drawn and you are in command. The rest is history. 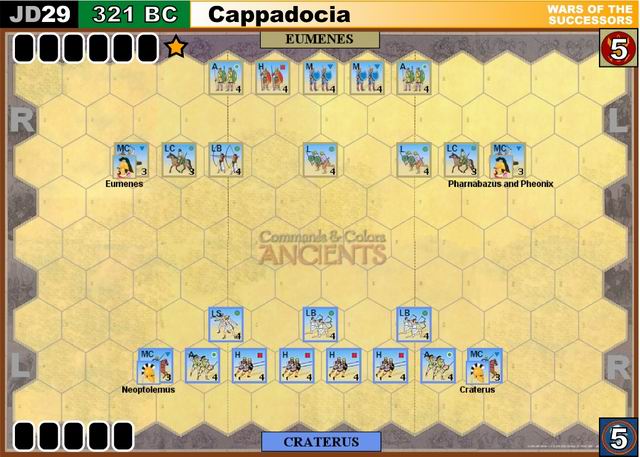 Special Rules
If Craterus ends his move within 2 hexes, and in the line of sight of the heavy infantry unit of Eumenes (Macedonian phalanx) roll one dice. If a leader symbol is rolled the unit defects to Craterus. Replace the eastern blocks with Greek blocks and the unit is immediately ordered. This roll can only be made once per game.

The leader unit in hex G11 represents Pharnabazus and Pheonix but acts as a single leader for all game purposes.