Historical Background
Following the Death of Alexander, many Greek states, led by Athens, hoped to rid themselves of Macedonian rule. A large Greek army was able to trap Antipater, the regent of Macedonia, in the city of Lamia thus giving this conflict the title of The Lamian War. Leonatus arrived from Asia minor and was able to free Antipater but was killed in the process. Antipater retired north and combined his own troops with those formerly commanded by Leonatus and with another army from Asia led by Craterus. This combined Macedonian force now munbered 43,000 infantry and 5,000 cavalry far more than the Greeks 25,000 infantry and 3,500 cavalry. In the battle the Greek allied Thessalian cavalry was getting the better of the action until the sheer weight of the Macedonian phalanx overwhelmed them and forced the Greeks to retreat. This Macedonian victory caused the Greeks to sue for peace and their quest for freedom was once again thwarted.
The stage is set. The battle lines are drawn and you are in command. The rest is history. 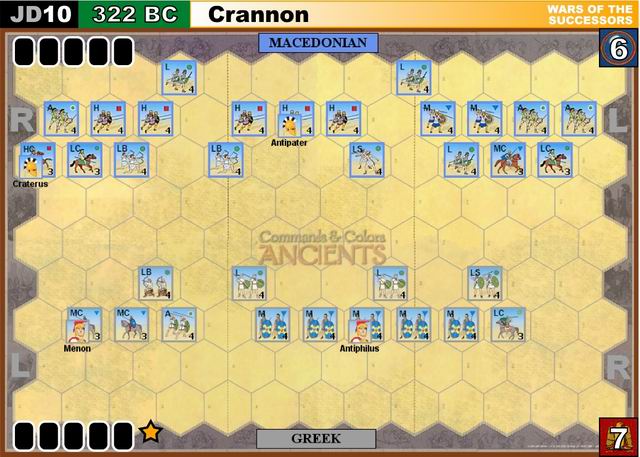 Yes, I modified the scenario a bit
1. Replaced Med Infantry with Med Hoplites
2. Replaced Macedonian Red Cav with Blue
3. Replaced Greek LB with LS
4. Made Victory banners 7 for both
5. Added Greek camp and made it worth a Victory Banner to boost Greek prospects.
see the VASSAL file below

Andygor replied the topic: #3442 2 years 8 months ago
To the changes in the scenario, in my opinion, it was necessary to add the replacement of two heavy detachments of infantry on the right flank of the Macedonians with hoplites. Thus we get a powerful center made up of elite heavy infantry, and more mobile flanks. All hoplites could be given the option to ignore 1 flag while they were in full force. This is only my opinion, but I would like to know the opinion of other participants of the tournament.

Mark-McG replied the topic: #3351 2 years 8 months ago
Scenario modified for use in the 2020 Open Tournament Round 3
link to Game Save file for that modified scenario
www.commandsandcolors.net/ancients/media...D10Crannon322BC.vsav
Read More...