Written by alecrespi. Posted in Wars of the Successors (323-281 BC)

Historical Background
One of the immediate consequences of the death of Alexander the Great (323 B.C.) was a revolt in Greece, led by Athens (Lamian or Hellenic War). Alexander had died without a clear heir, and there was almost immediately strife between his generals, now known as the Diadochi (“Successors”). This strife had encouraged the democratic party in Athens to believe that Macedonia was weak, and that the time was right to overthrow foreign domination and restore the city’s liberties.
In 323 B.C. Athens went into open revolt, raising a mercenary army and a fleet. They were joined by the Aetolians and Thessalians, and appointed Leosthenes to command the army. He moved north, first to Thermopylae and then to besiege the town of Lamia, on the border of Thessaly.
The siege gave its name to the war because within the town Leosthenes had trapped Antipater, the regent of Macedonia. So far everything was going well for the Greek rebels. Encouraged by Leosthenes’s successes, Corinth and Argos joined the allies. The first of Antipater’s fellow generals to respond to his calls for help, Leonnatus, was killed in a cavalry battle. Success must have seemed close.
Running a siege was a dangerous business even for the attacking general. Leosthenes was killed by a slingshot fired from the walls of Lamia. Worse was to come. The new Athenian fleet had been blocking the Hellespont, but in the spring of 322 another of Alexander’s generals, Craterus, sent one of his commanders (Cleitus) to take command of the Macedonian fleet.  He inflicted a defeat on the Athenian fleet close to Abydos, near the western end of the Hellespont. At least part of the Athenian fleet appears to have escaped, to fight again at Amorgos, but the way was clear for Macedonia troops to cross back into Europe from Asia Minor.
A force of veteran troops crossed over first, and relieved the siege of Lamia. Soon after, Craterus, with his main army, arrived in Thessaly, where they won the decisive battle of the war at Crannon.
Rickard, J (4 June 2007), Siege of Lamia, 322 B.C., http://www.historyofwar.org/articles/siege_lamia.html
The stage is set. The battle lines are drawn and you are in command. The rest is history. 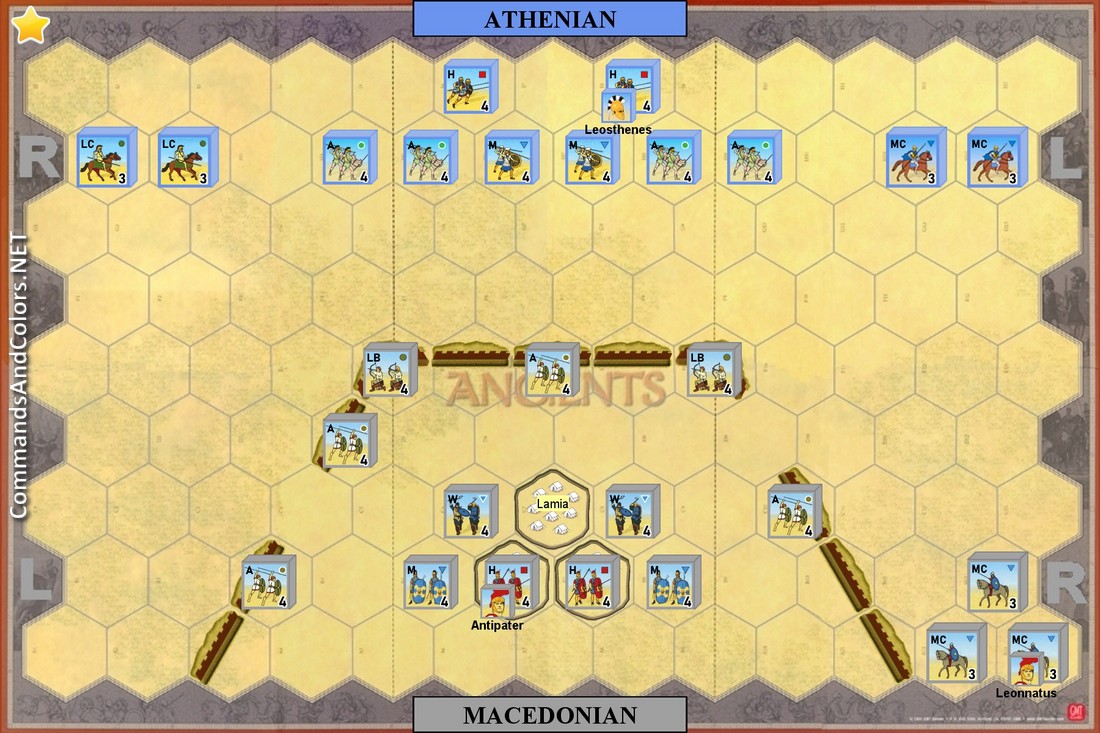