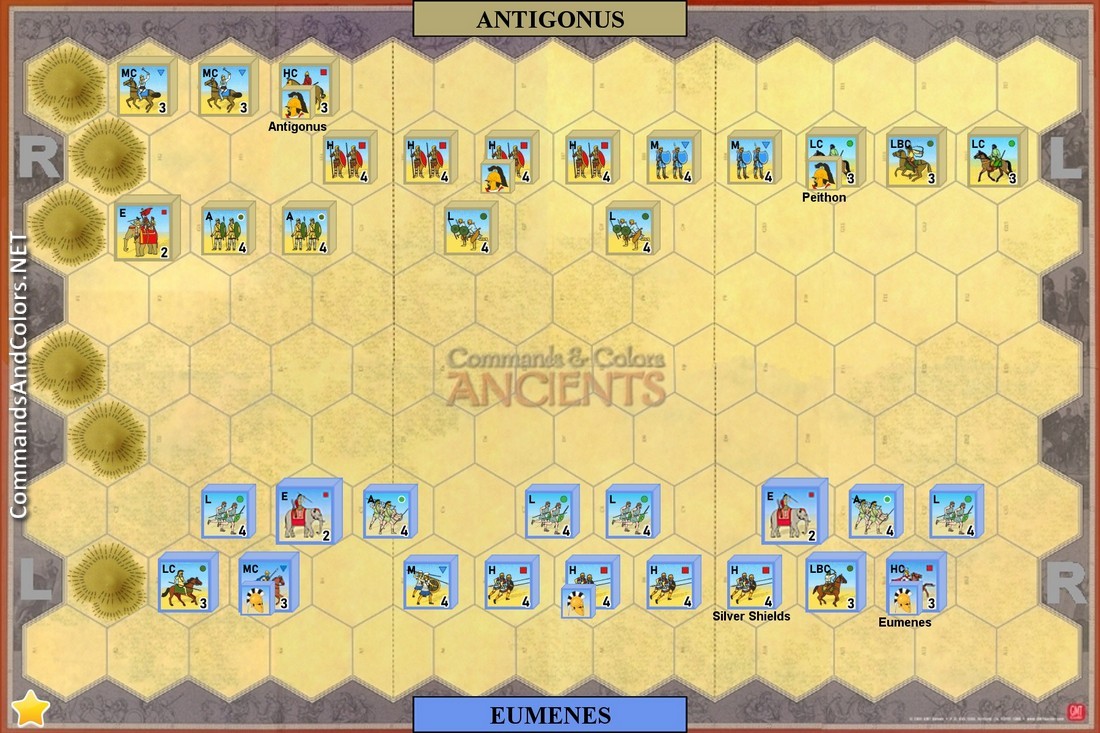 clavain replied the topic: #3838 1 year 7 months ago
Rematch with the same opponent, swapping sides. Almost my (Eumenes) entire hand at the start was left flank cards, so, surprise surprise, I plowed into him with my left flank repeatedly, with my elephants there doing quite well with hot dice, and pushing back the Antigonid right and counterattacks. I did lose my medium cav and should have lost a light cav and light infantry to Antigonid counterattacks, but my opponent had extremely bad luck with dice. His two medium cav had my light cav pinned against the board edge in the hills, yet somehow they survived and he lost both mediums over the course of a couple of turns. That gave me about a 5-1 lead if I recall correctly, and Antigonus got it back to 5-3 by killing my last elephant with two medium foot. But that then allowed me to get the Silver Shields and my heavy foot forward with a double time and essentially finish him off.
clavain replied the topic: #3829 1 year 8 months ago
This was a real slug fest and very close, with my Antigonids eventually prevailing by a score of 7-5. Things did not look good for them initially, as Eumenes' elephants ran rampant (literally). One managed to run into the Antigonid line and rampage against four or five units not once, not twice, but three times. Very annoying to say the least, but eventually the Antigonid skirmishers managed to kill both elephants. From that point on it was trading units for units, with my right flank cavalry charge countered by an advance led by the Silver Shields on the Antigonid left. I managed to reform a half decent line and shuffle some heavy infantry over to take out the Silver Shields, and then got the one card I needed to charge my medium cavalry onto Eumenes' left, while my Medium Infantry moved up to reinforce the line and cleaned out an auxiliary on his right. If I had not drawn that card, my opponent would likely have won the next turn with a Mounted Charge. Lots of fun, and could easily have gone either way
DanieleC replied the topic: #3703 1 year 11 months ago
Payed Solo.
Tight battle with a final score of 7-5 for Eumenes.
Early stages are characterized by Light infantry shooting, mainly from Eumenes troops with answers from right flank Light cavalry of Antigonus. In the meantime the centers are approaching each other’s with Antigonus Medium cavalry trying to break through on the right flank with not much success. Eumenes then seriously open the hostilities with an Elephant and Heavy cavalry mounted charge on his right. Elephants kill a Medium infantry and, with the momentum advance, an Auxilia while Heavy cavalry takes care of two units of light cavalry despite the attempt to evade. Antigonus Heavy infantry in the center ties the score, 3-3 so far.
Counterattack of Eumenes Elephants on the right and left flanks move score up (3-5) while Antigonus Heavy infantry continue to win in the center (5-5).
Fight in the center continues with alternate fortunes until a decisive attach on the right flank from Eumene’s Medium cavalry and Elephants get rid of a medium and a heavy infantry units and bring home the last two banners.
Now let's move to Gabiene as the plan for this year's end is to play the four Successor's battles.

TomKnight3 replied the topic: #3385 2 years 6 months ago
a really close game even though Eumenes' heavies broken through the Antigonus line. The Eastern heavy cav almost pulled off an upset. But in the end Eumenes wins 7-6.
Valvorik replied the topic: #3293 2 years 7 months ago
Fun scenario due to close matching of forces meaning that waiting for right card combo and counter-elephant/elephant maximizing strategies are important.
Read More...