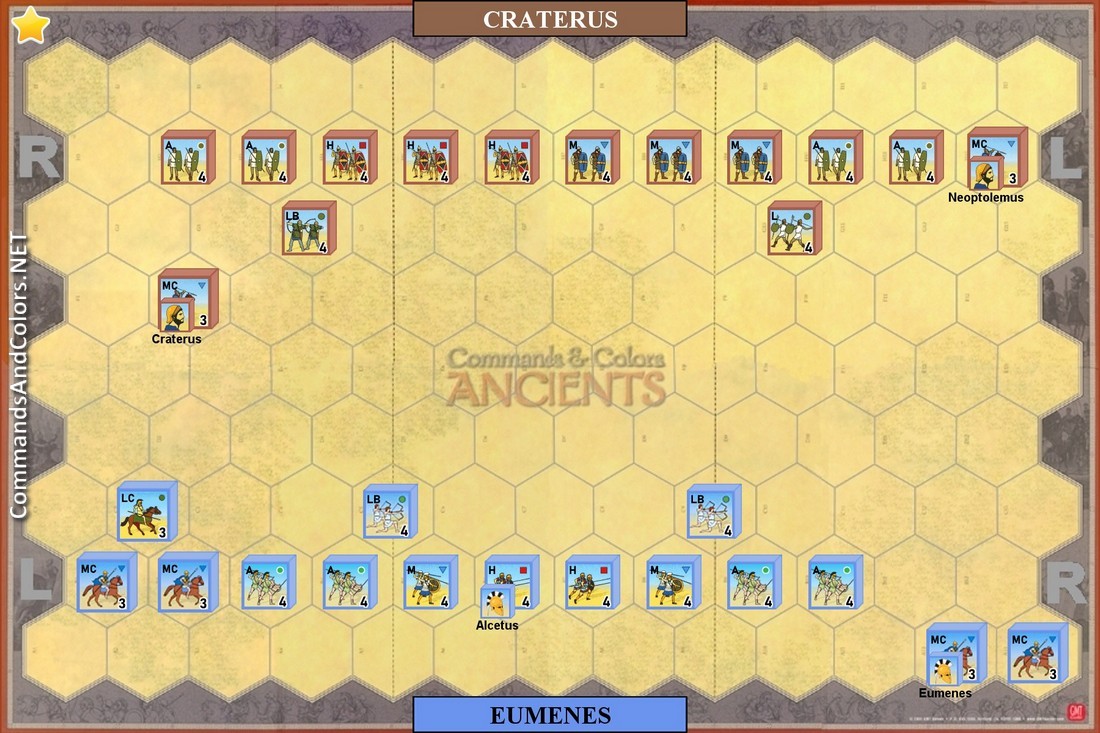 clavain replied the topic: #4046 1 year 4 months ago
So my regular opponent and I have finally reached the Successors in our weekly C&C Ancients Vassal game. Today was Eumenes vs Craterus at the Hellespont, 321BC. It was a near-run thing with my Craterans (Craterusans? Craterusids?) coming out ahead of the Eumenids (?) 6-5. I advanced my line of heavy and medium infantry forward, hoping to take advantage of my numbers in foot, while Eumenes countered with his cavalry, where he had the advantage.
The catch was that if any leader died, that side's command cards were permanently reduced by 1, and if both leaders on a side died that side automatically lost. So one might think that we would be naturally more cautious with our leaders, right? Naw.
Eumenes and his medium cav came flying out of the blocks to try to wipe out Craterus and his smaller cavalry force. He did some damage, but Craterus escaped to take over the command of the heavy and medium infantry. When the two lines of battle met, Craterus' forces were pushed back and severaly weakened (I think it was around 4-3 Eumenes at that point).
Eumenes decided to slam into Craterus right and center with all of his cavalry, twice, once in a Mounted Charge, which worked fairly well, and left him 5-4 up, but he missed out on winning as Craterus managed to retreat out of harm's way. The losses he took in battle backs on the last charge would prove critical, as it left Eumenes exposed at the head of his medium cav, and Craterus moved in with a 2-point heavy foot and a 3 point medium foot to cut off his retreat/evade path, while Eumenes own foot blocked the retreat of a second cav unit.
Both those cavalry died gloriously trapped between the enemy and their own lines, while the craven Eumenes managed to retreat to the remnants of his foot, giving Craterus the win and overturning history once again. The traitor Neoptolemus, who had deserted Eumenes to join Craterus, spent the game sipping wine. Both armies were largely destroyed, so I guess we could call it a Crateric victory, as you-know-who hasn't appeared on the scene in Syracuse yet.
DanieleC replied the topic: #3702 2 years 4 weeks ago
Played solo.

Craterus starts is amazing. Thanks to a mounted charge his two medium cavalry are able to slain the four of Eumenes who also perish in the battle. 5-1 and the signals of an easy Craterus win are all there. But the battle calms down on the flanks and the hype starts to mount in the center where the heavy and medium are marching towards each others for the final confrontation. And here is where Alcetus shows all his bravery and proof how much leaders are important to guide their troops to victory. Helped by the fact that Craterus left the heavy on the left flank behind Alcetus arrives at the clash with the enemy on par and slain them. Craterus center is lost and now we are 5-5. Some shoot here and there give Eumenes the final banner to claim victory.
History is respected, although Eumens is dead.

Now let's move to Paraitacene as the plan for this year's end is to play the four Successor's battles.

Thanks to Michal Kowalczuk to have inspired this (theboardgameschronicle.com/2020/06/17/cc...uccessors-in-action/ )

TomKnight3 replied the topic: #2962 3 years 9 months ago
Close battle with Judd as we start a series to see if Eumenes can win all three battles. It was a very close game with the center being a slugfest. At the very end an order meduim allowed Eumenes and his medium mounted to win a close victory 6-5. Now it is on to Paraitacene!
Read More...