Historical Background
Sparta had stood on the sidelines while Athens and Thebes battled Macedon at Chaeronea. As the Macedonian army plunged ever deeper into Asia, King Agis III sensed an opportunity to regain the hegemony of Greece for Sparta. Agis began secret negotiations with the Persians and obtained funding for a rebellion. In 331 the Macedonian army was stretched thin—Alexander was advancing into Mesopotamia, Antigonus was fighting an insurrection in Phrygia and Antipater, the strategos of Europe, was quelling a revolt in Thrace. Agis chose this opportune moment to attack Megalopolis, but Antipater quickly subdued the Thracians and headed south to face the upstart Spartans. Agis commanded 20,000 foot and 2,000 cavalry while Antipater had about 30,000 men. Agis’s numerical inferiority convinced Agis to lift the siege and maneuver to a constricted battlefield. When the two armies clashed, Agis’s Spartans broke through the Macedonian line at first, and his mercenaries drove back their opponents. Antipater brought up his reserves and stabilized his line. There was fierce fighting around the Spartan king and when Agis was slain, his army collapsed. The power of Sparta was broken for a century, and Alexander’s home base was secure as he headed further east.
The stage is set. The battle lines are drawn and you are in command. Can you change history? 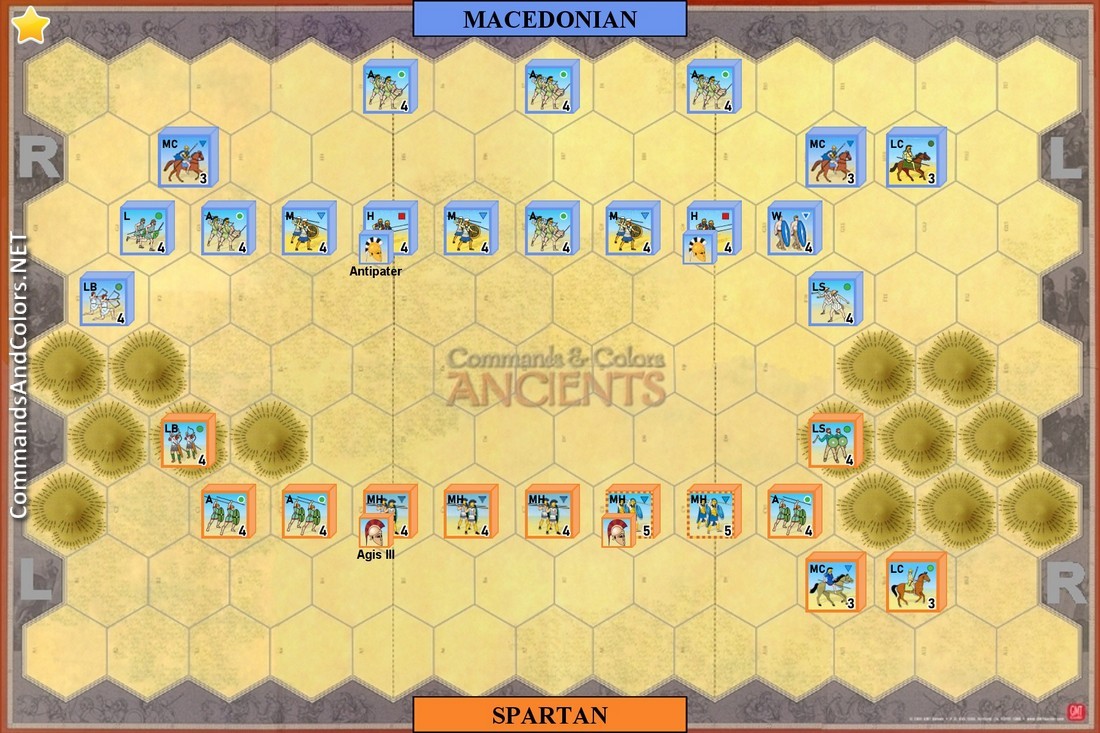 GF1954 replied the topic: #4437 4 months 2 weeks ago
2 solitaire with both sides winning once. The Macedonians won the first 7 - 3, while the Spartans took the second, 7 - 4. Not so much the first game, but in the second, the Spartans did much damage from the hilltops. Perhaps, one of keys to victory from either side as controls the hilltops.

Warboard replied the topic: #3857 1 year 9 months ago
From instagram @warboard: Eventually, the Spartans crush the Macedonian right, with the Macedonian centre still stationary, for a decisive victory of 7 to 3 trophies. Alexander better hurry back...

mk20336 replied the topic: #2308 5 years 1 month ago
I have played it yesterday and despite all the efforts as Spartans I just could not move through the mass of Macedonians - especially after clever play of Move-Fire-Move which positioned AUX before HI. It finished 5-7: