Written by alecrespi. Posted in Alexander the Great (338-323 BC)

Historical Background
After Alexander finally defeated Darius in 330 BC at the battle of Guagamela (aka Arbela), he slowly travelled east towards his victory at the Hydaspes river over King Porus in 326 BC. On his way he subdued many different tribes and nations. In 327 BC he had just captured the town of Arigaeum to the east of modern day Kabul in Pakistan when he learnt that the local Indian chief had gathered a large force on a nearby hill.
Alexander approached the hilltop position over open ground and enticed the Indians to leave their position and attack his small force. When they did so, two flanking forces commanded by Leonatus and Perdicas, that Alexender had previously positiond, pounced on and eliminated them.
The stage is set. The battle lines are drawn and you are in command. Can you change history? 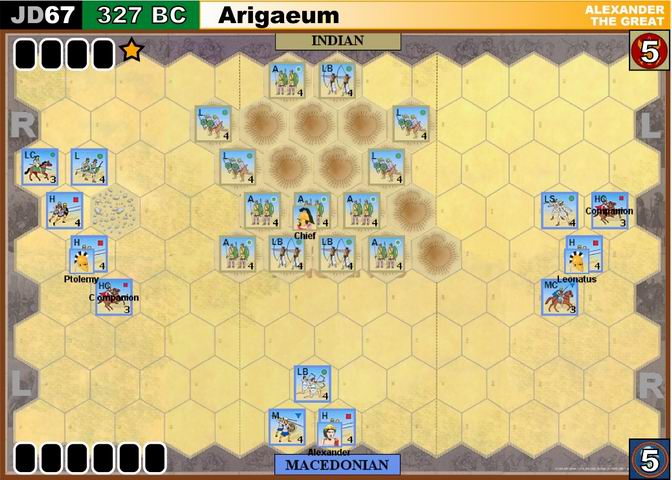 Special Rules
The Macedonian medium infantry unit (Hypaspists) may ignore one crossed sword and retreat banner and may move 2 hexes if it doesn't battle.

All Macedonian heavy cavalry are Companions.