Historical Background
"After the victory at Issus, Alexander marched south into Syria and Lebanon, liberating cities and capturing Persian naval bases along the way. When the city of Tyre refused to yield to Alexander in 332BC, the Macedonian King spent a year reducing the offshore fortress, constructing a mole half a mile long and conducting a tenacious siege until the city fell. Alexander next freed Egypt from the Persian yoke..... Recognising the threat Alexander posed to his reing, Darius offered to give the Macedonian King all of the territory west of the Euphrates river. Alexander refused the peace offering, then marched into Mesopotamia in search of a final battle with Darius. As Alexander marched down the Tigris River, Darius moved to intercept hs army of 47,000 men (40,000 infantry and 7,000 cavalry) with an army between 75,000 and 250,000 men. The two armies met on the plain of Guagamela. On 1 October 331BC Alexander faced the Great King in the largest battle of his military carear. ....
The Great King had formed up his cavalry based army on the level plain of Guagamela, removing all obstacles on the terrain so that his scythed chariots would have full use of the field....Alexander massed his army against the Persian centre, planning to strike the enemy line where the banners of the Immortals suggested Darius was located and before the wings of the Persian army could engulf his own.
Personally leading a squadron of Companions..., Alexander and his army approached the enemy line obliquely left to right, compelling the more numerous and extensive Persian line to shift in the same direction in order to outreach the Macedonian flank. But the continuous shifting pulled the Persian army from the prearranged battlefield and away from level ground, forcing Darius to sieze the initiative, sending his chariots and cavalry against the right of Alexander's line.... Alexander's heavy infantry held, absorbing the Persian charge. When the majority of the Persian army advanced to the aid of the chariots, gaps appeared in the Persian line.
Seeing an opportunity.......Alexander personally led his Companions through the gap and towards the persian royal bodyguard. Once again Darius panicked and fled the battlefield. But Alexander, instead of pursuing the Great King, swung his right wing into the flank of the advancing Persian line, crushing the enemy between the hammer of his wheeling cavalry squadrons and the anvil of his heavy infantry....By battles end, thousands of Persians lay dead or dying, while Alexander's losses were only a few hundred men."
(Taken from "WARFARE IN THE ANCIENT WORLD" by Brian Todd Carey.)
The stage is set. The battle lines are drawn and you are in command. Can you change history? 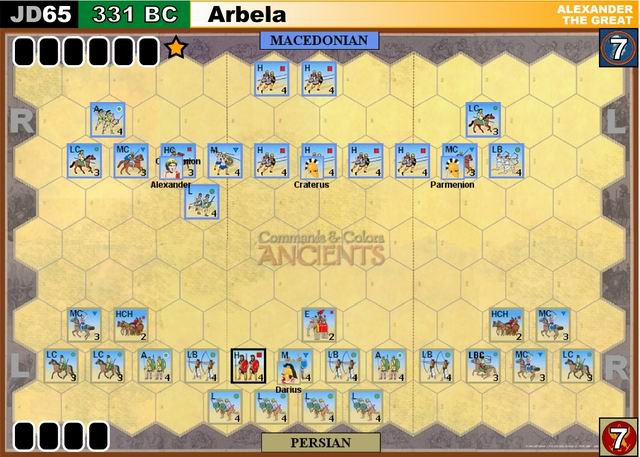 The Macedonian medium infantry unit (Hypaspists) may ingore 1 retreat banner and 1 crossed sword and may move 2 hexes if it doesn't battle.

The Persian medium infantry unit are the Immortals.