Historical Background
In November 333BC Alexander encountered Darius' army standing firm behind the Pinarus River, next to the Gulf of Issus. ....... The order of battle pitted cavalry versus cavalry on the gulf side, infantry versus infantry in the centre and, because of the extended frontage of the Persians, Macedonian cavalry and light troops against Persian infantry near the slopes of the mountain. As the Macedonian phalanxes engaged the Persians at the river, Alexander's light troops pushed back the Persians on the hill, forcing the Macedonian king to edge right to protect the wing. With his right wing protected, Alexander and his Companion heavy cavalry pushed forward and outflanked the Persian infantry, causing a rout. While heavy infantry in the centre clashed, Darius' cavalry on the weighted right wing pushed the ontnumbered Macedonian cavalry back, but the wing held when Macedonian light infantry reinforced the failing cavalry. After routing the Persian infantry, Alexander swung left and engaged the Great King's chariots. A bitter battle ensued and Alexander was wounded in the thigh. Beleiving the Macedonians were gaining the upper hand, Darius fled the field. As the chariots left the battlefield, Alexander's Companions wheeled into the flank and rear of the enemy heavy infantry, pinning thousands of Persian infantry and mercenary Greek hoplites between phalanx and lancer in a classic "hammer and anvil" manoeuver. With the Great King fleeing, the Persian right lost its will to fight, broke and ran. The Greek mercenaries managed to extricate themselves, but suffered heavy losses. In his haste to leave the battlefield and the area, Darius abandoned his mother, wife and children, as well as an extensive baggage train. Now Alexander had royal hostages for political leverage and a royal treasury to finance future campaigns. (Scenario based on and text taken from "WARFARE IN THE ANCIENT WORLD" by Brian Todd Carey)
The stage is set. The battle lines are drawn and you are in command. Can you change history? 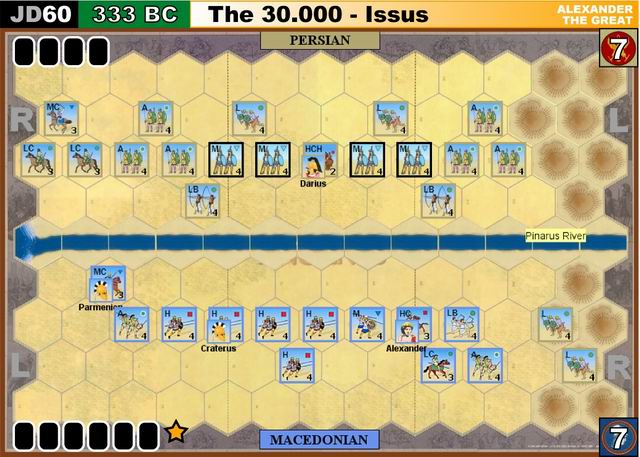 Special Rules
The river (Pinarus) is fordable with no battle dice reductions.

The Macedonian medium infantry unit (Hypaspists) may ignore 1 crossed sword and 1 retreat banner. It may move 2 hexes if it doesn't battle.

NOTE:-The title is based on the number of Greek mercenaries quoted for this battle by Arrian. It is appropriate for this special occassion scenario. but many modern scholars actually beleive that there were no more than about 10,000 Greeks present at the battle.