Historical Background
After his Victory at Guagamela, Alexander advanced on the Persian Royal city of Persepolis. He sent Parmenion with the Baggage and the mercenary and allied troops along the Royal road to the South while he took the Macedonians and some light troops, numbering about 10,000, through the Zagros mountains to the North. After easily subduing local Uxian tribes, Alexander proceeded towards the mountain pass known as the Susian or Persian Gate. The Satrap of Persis, Ariobarzanes, set a trap for Alexander in the narrow mountain pass with 700 cavalry and maybe 25,000 infantry. The first Macedonian advance up the pass was met by withering fire from the clifftops above. The Macedonians could not ascend to fight back and they fell back in disorder after suffering heavy casualties in Alexanders first major setback.
Alexander now made a more subtle approach. He left Craterus at the base of the pass to distract the Persians while the rest of his force made an arduous outflanking march through the mountains. On approaching the Persians Alexander detached a force under Philotas to attack from the North while he took his elite troops round to the East. The Persians were totally surprised by the attack in their rear and their army collapsed as Craterus joined the assault up the pass.
Alexander captured the magnificent new city of Persepolis and razed it to the Ground. Ariobarzanes escaped the battle only to dissapear into the mists of history.
The stage is set. The battle lines are drawn and you are in command. Can you change history? 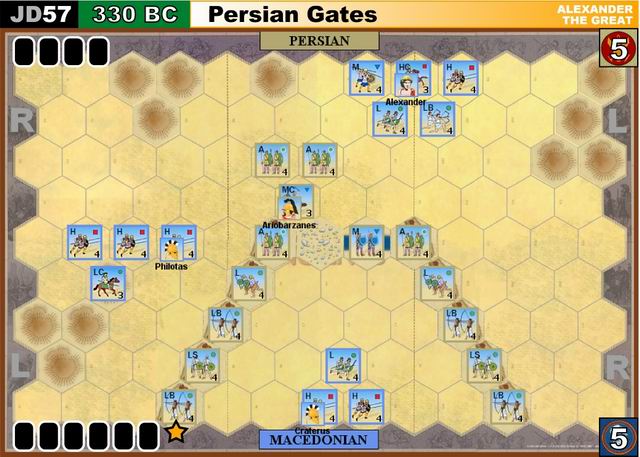 The river represents a rampart facing into hexes D7 and D8.

The Macedonian medium infantry unit (Hypaspists) may ignore 1 crossed sword and 1 retreat banner and it may move 2 hexes if it doesn't battle.

The units on hexes A7, A8 and B7 may not be ordered or attacked until the 3rd Macedonian turn.

Due to surprise, on the 1st Macedonian turn, that players attacks gain 1 dice and Persian units will battle back with 1 less dice.