Historical Background
Spitamenes was a former officer of Darius and in 329 BC, as Alexander pressed east, he raised a rebellion in the province of Sogdia. He placed the city of Maracanda under siege and annihilated the force of 2,300 Greek mercenaries sent by Alexander to lift the siege.
Alexander now sent his veteran commander Coenus to patrol the area in which Spitamenes, now reinforced with many Scythians, was operating. Coenus brought Spitamenes to battle near the Sogdian stronghold of Bagae on the edge of the Scythian desert in 328 BC. Spitamenes was deafeated losing 800 horsemen. The Scythians, to appease Alexander, Killed Spitamenes and sent Alexander his head.
This was Coenus's greatest moment. After Hydaspes he would be the general speaking on behalf of the macedonian troops to try and convince Alexander to stop his eastward conquests. Shortly thereafter he fell ill and died.
The stage is set. The battle lines are drawn and you are in command. Can you change history? 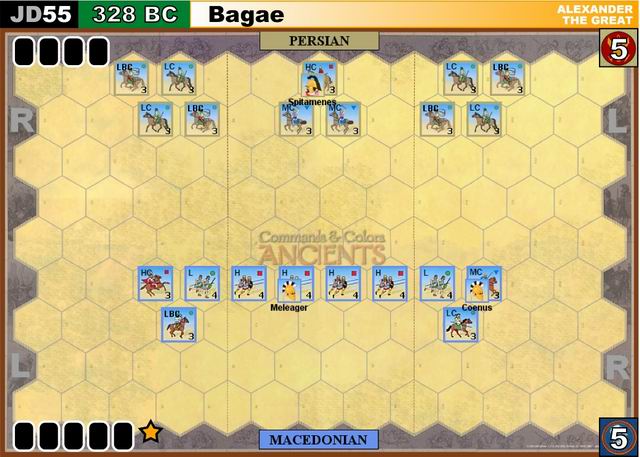