Historical Background
The Greek cities of southern Italy, known as Magnia Grecia, sometimes asked for assistance from their Greek homeland for help fighting against the local tribes. The first to assist them was King Archidamus III of Sparta, who perished fighting the Lucanians at the Battle of Manduria in 338 BC. Next to answer the call was Alexander the Great's uncle, King Alexander I of Epirus. He was keen to emulate his nephew's success in Asia with victory in Italy. Also he hoped to avoid a prophecy which foretold him to beware the city of Pandosia and the River Acheron, both of which were in Epirus.
Alexander was initially successful and captured many Lucanian and Bruttian towns and cities. In 331 BC his army was encamped on three hills near the city of Pandosia on the Lucanian border from where he could initiate raids. Recent heavy rain had made access between the camps difficult and the Lucanians took the opportunity to launch a surprise attack. They quickly overan two of the camps. Alexander in the final camp broke out with his remaining troops but as he tried to cross a local river and escape he was killed by some of his Lucanian exiles who had struck a deal with the Lucanians. The River in which Alexander died was of course called the Acheron. The final Greek to help Magnia Grecia would be Pyrrhus of Epirius who would come in 280 BC and start the famous Pyrrhic wars.
The stage is set. The battle lines are drawn and you are in command. Can you change history? 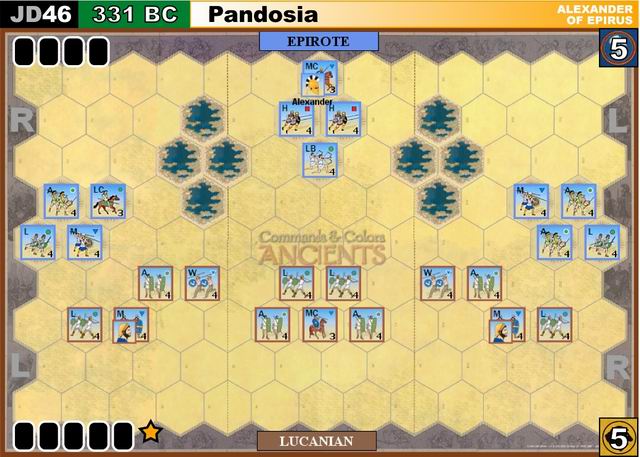 Special Rules
Due to surprise, on the 1st Lucanian turn that players units attack with +1 attack dice, while all Epirote units will battle back with 1 less dice.

If Alexander evades off the board he must make an immediate casualty check with 1 dice. This is in addition to any other casualty check he may have to make (This simulates the attempt on his life at the River Acheron).

Alexander is worth 2 victory banners.