Historical Background
"In the spring of 334 BCE, Alexander crossed the Hellespont at the head of an army of perhaps 32,000 infantry .. (and) 5,100 cavalry. ...Hearing of the invasion, the newly enthroned Persian ruler, Darius III, ordered the Satraps of Anatolia to intercept the young Macedonian King with an army of 40,000 men, including a large contingent of Persian cavalry and some 20,000 Greek mercenary hoplites commanded by the renowned battle captain Memnon of Rhodes."
"Three days after Alexander's landing in Asia Minor, the two armies caught sight of one another near the shallow Granicus River in north-western Anatolia. ...Both armies raced for the river, but the Persian cavalry arrived first. Under the command of Spithradates, the Persians held the opposite bank with perhaps 17,000 cavalry and waited for their allied Greek hoplites to catch up."
"Alexander ordered an immediate attack along the entire length of his front. Personally leading his Companions formed in their famous wedge, Alexander charged across the river aiming obliquely at the persian centre. As the Macedonian cavalry emerged from the opposite river bank in ever-increasing numbers, the Persian cavalry there broke and fled. A general rout ensued. A second Macedonian cavalry charge mowed down retreating Persian cavalry, pinning half the Greek hoplite mercenaries against a low hill until Macedonian infanrty surrounded them. Deciding to make examples of the Greek traitors, Alexander sent 2,000 surviving hoplites back to Greece in chains. Alexander's total losses for the entire battle were 150 men."
(Taken from "WARFARE IN THE ANCIENT WORLD" BY Brian Todd Carey)
The stage is set. The battle lines are drawn and you are in command. Can you change history? 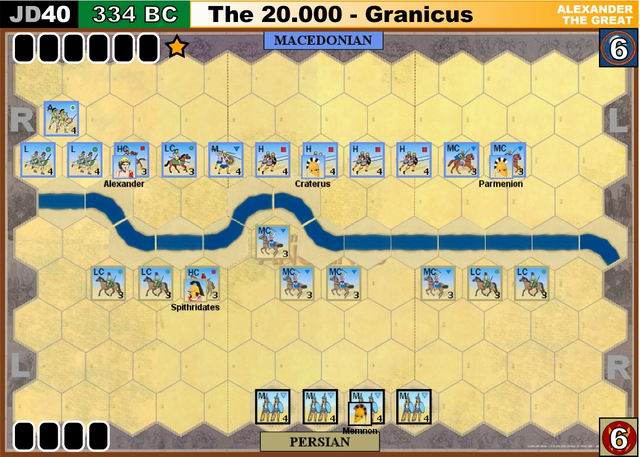 One of the initial Macedonian cards should be "Mounted charge".

On the 1st Macedonian turn, Persian cavalry may not evade.