Written by Miguel Marques. Posted in Alexander the Great (338-323 BC)

Historical Background
The Spartans, who were not members of the League of Corinth and had not participated in Alexander's expedition, saw in the Asian campaign the long awaited chance to take back control over the Peloponnese after the disastrous defeats at Leuctra and Mantinea. The Persians, desperate to divert Alexander from his triumphant march, agreed to support King Agis, making possible the formation of an army 22,000 strong. These included the Greek mercenary survivors of Issus who had served in the Persian army and were hungry for revenge, but as always after Leuctra real Spartans were in short supply. In the summer of 331 BC Agis defeated Corrhagus, the Macedonian garrison commander of Corinth, and started to besiege Megalopolis. Antipater made peace with the revolting governor of Thrace and gathered an army of 40,000 men, with a small Macedonian nucleus (he had just sent 15,000 reinforcements to Alexander) and substantial numbers of northern barbarians and other Greek allies. Swifter than the Spartans could develop their plans he was upon them. Agis was compelled to head for the hills, but he turned and formed for battle when he reached a pass narrow enough to negate the Macedonian force's numerical advantages. The Macedonians came on and the heavy infantry clashed with the issue going back and forth. The Spartan allies held up the flanks, and the skirmishes on the hills were indecisive. The inexperienced Macedonian phalanx broke and was pushed back, but out in the open the Spartans were now being pushed back themselves and their allies gave way. Agis lead his army with unsurpassable courage, but was wounded in the midst of battle and died a hero's death. In the end the sheer weight of numbers brought victory to the Macedonians, but the violence of the fight lead to an exceptionally high death toll on both sides: 5,300 Spartans and 3,500 Macedonians. When news of Antipater's victory over legendary Sparta came to Alexander, well after the Battle of Gaugamela, he remarked in a fit of jealousy: "It seems, my friends, that while we have been conquering Darius here, there has been a Battle of Mice in Arcadia".
The stage is set. The battle lines are drawn and you are in command. The rest is history. 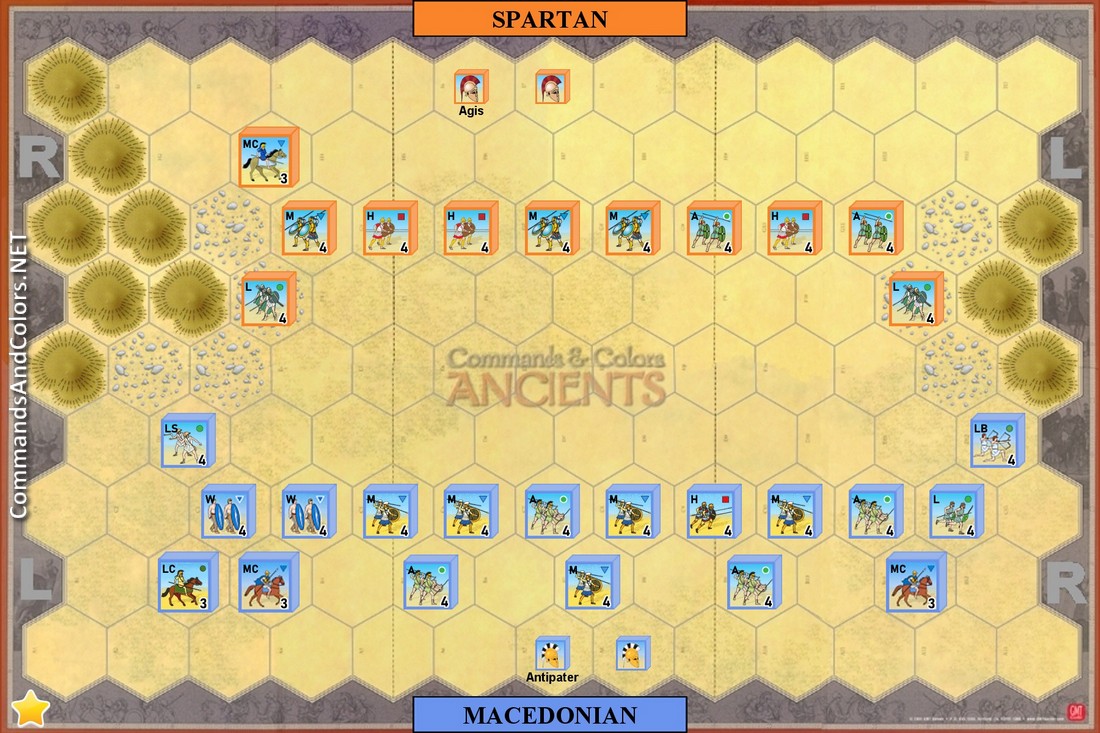 Special Rules
All the hill hexes are impassable terrain.

Little is known about the battle formations. Each player places his two leaders on the battlefield after reviewing his Command Cards, the Macedonian first and then the Spartan.