Historical Background
When the actually started, the Alexandrian cavalry was to the right of their line, but Alexander sent a group of cavalry to circle behind the Indians and attack them from behind. The Indians were poised with cavalry on both flanks, the war elephants in front, and infantry behind the elephants. These war elephants presented an especially difficult situation for Alexander. Most of his success on the battlefield has been due to his ability to separate the enemy lines and drive his crack Companion Cavalry into the opening. This was used with devastating effectiveness at both Chaeronea and Gaugamela. However, the Indian elephants scared the Macedonian horses. The mere scent of these incredible creatures forced Alexander to modify his strategy. Alexander started the battle with a customary charge on the right flank with predictable results, the Indian left became weak, and Porus reinforced that side with cavalry from the right. This left nobody to oppose the circling cavalry that attacked the Indian cavalry from behind. This was exactly what Alexander wanted. He was able to destroy the Indian cavalry without bringing his mounted units near the elephants. Had the Indian cavalry not been destroyed they could have endangered his phalanxes later in the battle, and the Macedonian horse may not have been able to support the foot soldiers against the Indian cavalry due to the proximity of the elephants. Meanwhile, the Macedonian phalanxes and the attached Persian infantry had advanced to engage the charge of the war elephants, which was stopped, albeit with heavy casualties to the infantry. The mahouts of the elephants were killed, and some hamstrung, the Alexandrian force eventually surrounded the Indian force. After massive casualties, Porus, who was wounded in the fighting, surrendered. Casualty figures are hard to come by, but the Indians are said to have lost all of their cavalry, much of their infantry, and over 100 war elephants. The Alexandrians captured over 80 elephants, and suffered a heavy toll in their infantry. The losses to their cavalry arm was much less by comparison. Historian Peter Green argues that Alexander lost as many as 4,000 men, mostly phalanx troops. They had borne the brunt of the fighting against the elephants, as the horses of the Macedonian cavalry had refused to go near the beasts. Despite the defeat, Alexander spared Porus' life and let him rule Hydaspes in Alexander's name. This was the furthest that Alexander went, as his army refused to go any further after seeing the first real use of the war elephants and being exhausted by eight years of continuous campaigning. The combat against the elephants was said to have had a fearful psychological effect on Alexander's men, particularly those in the phalanxes. That they withstood the war elephants was a tremendous testament to their discipline and skill as soldiers. Alexander died a few years later in 323 BC and his empire fell apart to civil war. After various battles and revolts, Hydaspes again became independent. As a result of this battle, Alexander founded two cities, Nicaea (Victory) at the site of modern day Jalapur in Pakistan and Bucephala at the site (possibly) of Bhora. Bucephalus was the name of the horse that Alexander rode on, having died either during battle or right afterwards of weariness and old age.
The stage is set. The battle lines are drawn and you are in command. The rest is history. 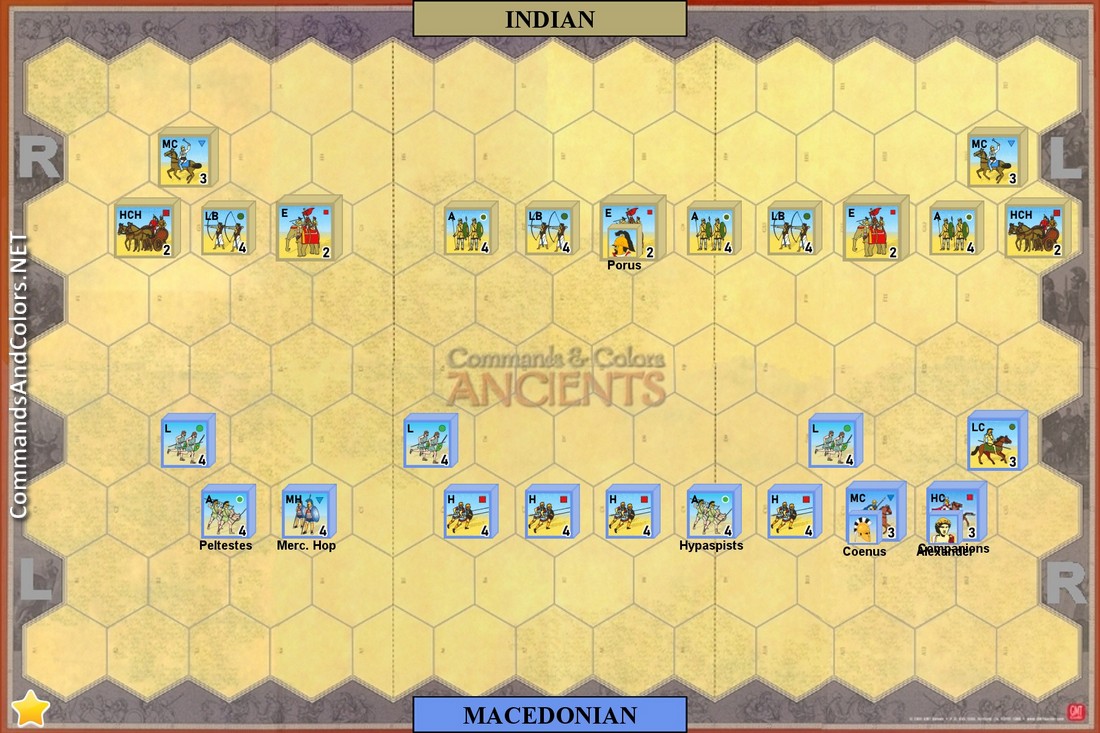 Special Rules
Coenus, if attached to the Medium cavalry and not adjacent to enemy, may, on the play of any Macedonian card capable of activating units in the left section, be picked up with the medium cavalry and placed on any hex of the Macedonian left hand board edge. He and his unit are activated and may now move and attack normally. No other unit or leader may be activated that turn.
This may only happen once in the game, and simulates Coenus’ flanking manouevre.