Historical Background
Darius had recruited the finest cavalry from his satrapies and from an allied Scythian tribe. Darius also deployed scythed chariots for which he had prepared cleared terrain in front of his troops. He also had 50 Indian elephants supported by Indian chariots, although these seemingly played no role in the battle. Before the battle, Darius ordered bushes and vegetation removed from the battlefield, to maximize the chariots' effectiveness. Darius placed himself in the center with his best infantry as was the tradition among Persian Kings. He was surrounded by, on his right, the Carian Cavalry, Greek mercenaries, and the Persian Horse Guards. In the right-center he placed the Persian Foot Guards (Apple Bearers/Immortals to the Greeks), the Indian Cavalry and his Mardian archers. On both flanks were the cavalry. Bessus commanded the left flank with the Bactrians, Dahae Cavalry, Arachrosian Cavalry, Persian Cavalry, Susian Cavalry, Cadusian Cavalry, and Scythians. Chariots were placed in front with a small group of Bactrians. Mazaeus commanded the right flank with the Syrian, Median, Mesopotamian, Parthian, Sacian, Tapurian, Hyrcanian, Albanian, Sacesinian, Cappadocian, and Armenian cavalry. The Cappadocians and Armenians were stationed in front of the other cavalry units, and led the attack. The Albanian and Sacesinian cavalry were sent around to flank the Macedonian left. The Macedonians were divided into two, with the right side of the army falling under the direct command of Alexander, and the left to Parmenion. Alexander fought with his Companion Cavalry. With it were the Paeonian, and Macedonian light cavalry. The mercenary cavalry was divided into two groups, with the veterans being stationed on the flank of the right, and the rest being put in front of the Agrians and Macedonian light troops which were stationed next to the phalanx. Parmenion was stationed on the left with the Thessalian, Greek mercenary, and Thracian cavalry units. There they were to pull off a holding maneuver while Alexander landed the decisive blow from the right. On the right-center of the formation Cretan mercenaries. Behind them was a group of Thessalian cavalry under Phillip, and Achaian mercenaries. To their right was another part of the allied Greek cavalry. From there came the phalanx, which was placed into a double-line. Due to being outnumbered over 5:1 in cavalry, and their line surpassed by over a mile, it seem inevitable that the Macedonians would be flanked by the Persians. The second line were given orders to deal with any flanking units should the situation arise. This second line consisted of mostly mercenaries. During the battle Alexander used a unique strategy which has been duplicated only a few times throughout history. His plan was to draw as much of the Persian cavalry as possible to the flanks. The purpose of this was to create a gap within the enemy line where a decisive blow could then be struck at Darius in the center. This required almost perfect timing and maneuvering, and the Great King himself to act first.. As the Persians moved farther and farther to the Macedonian flanks in their attack, Alexander slowly filtered in his rear-guard. The Persians followed suit, until finally a gap opened between Bessus's left and Darius's center as Alexander had sent in his last mounted reserves against the Persians. Alexander disengaged his Companions, and prepared for the decisive attack on the Persians. Leading the way, he formed his units into a giant wedge, with him leading the charge. Behind them guards brigade, and any phalanx battalions he could withdraw from the battle. These were follow-up light troops. This large wedge then smashed right into the weakened Persian center, taking out Darius's royal guard, and the Greek mercenaries. Bessus on the left, now cut off from Darius, and fearing he himself would be struck with this wedge, began to pull back his forces. Darius was in danger of himself being cut off, and here several accounts differ as to what happened. According to most accounts, Darius broke and ran, and the rest of his army followed suit. However the only preserved contemporary account, an astronomical diary from Babylon written within days of the battle, says this: The twenty-fourth [day of the lunar month], in the morning, the king of the world [i.e., Alexander] [erected his] standard [lacuna]. Opposite each other they fought and a heavy defeat of the troops [of the king he inflicted]. The king [i.e., Darius], his troops deserted him and to their cities [they went]. They fled to the land of the Guti. Diodorus agrees with the story, backing up its validity. It would seem this is the most likely account of the battle.
The stage is set. The battle lines are drawn and you are in command. Can you change history? 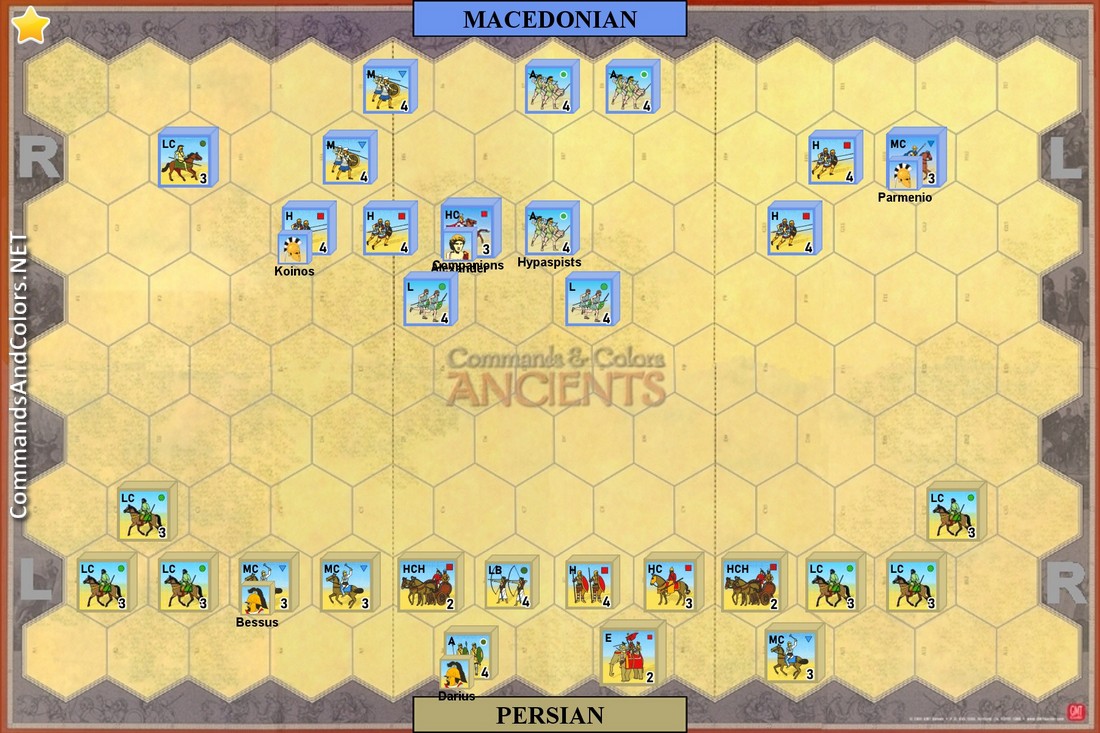 HANJEL replied the topic: #4385 6 months 6 days ago
I played using the rules that gives Alexander an additional dice in close combat, also Companions and Hypaspists ignore one sword and may ignore one flag. Also I give the unit with Darius the Inmortals usual ability (bows) and one more: they ignore one sword.
I played for 7 banners (6 is so few for Gaugamela, it was a long battle).
It could be a good idea to put all chariots on the left, but I didn't change it.
I interpreted and changed some rules, but in spite of that this scenario likes me more than the official one. The possition of elephants, the importance of Companions, the possition of Darius... I think it reflects better History.
Read More...