Historical Background
Alexander set out into Asia in 334 BC and defeated the local Persian satraps at the Battle of the Granicus. He then proceeded to occupy all of Asia Minor. While Alexander was in Tarsus he heard of Darius massing a great army in Babylon. If Darius were to reach the Gulf of Issus he could use the support from the Persian fleet under Pharnabazus , thus easing his supply and possibly landing troops behind the enemy. Alexander kept his main army at Tarsus but sent Parmenio ahead to occupy the coast around Issus. In November, Alexander received reports that the great Persian army had advanced into Syria, to a town named Sochi. Alexander decided to mass his scattered army and advance south from Issus through the Pass of Jonah. Darius knew that Parmenion held the Pass of Jonah and thus chose a northern route of advance. The Persians captured Issus without opposition and killed all the sick and wounded that Alexander had left behind. Now Darius found out he had placed his army behind the Macedonians and had cut their supply lines. He then advanced to a good defensive position along the river Pinarus and waited for Alexander to come to him. Alexander led his Companion cavalry on the right flank and he set his Thessalian Greek allied cavalry on the left of the Macedonian phalanx with Parmenion in command. Darius formed his line with his heavy cavalry concentrated next to the coast on his right, followed by the Greek mercenary phalanx (historian A.M Devine places them at a strength of 12,000, comparable to the Macedonian phalanx). Next to the Greek phalanx Darius spread his Persian infantry, the Cardaces, along the river and into the foothills, where they wrapped around to the other bank and threatened Alexander's right flank. Darius positioned himself in the centre with his best infantry, the Greek mercenaries, and his royal cavalry guard. According to some historians, like P. Stratikis, he was trying to "copy" the Hellenic battle formation of the Battle of the Granicus . The Persian cavalry charged Parmenio and the allied cavalry across the river to open the battle. Alexander's left wing once again became the crux of the battle, like at Gaugamela two years later, where Parmenio held the wing long enough against superior Persian numbers so that Alexander could make his calculated cavalry strike against Darius and break the Persian army. The Hypaspists led by Alexander, on foot, delivered an assault during this time across the riverbed on the Cardaces and managed to punch a hole through the Persian line. Alexander then mounted a horse at the head of his Companion Cavalry and led a direct assault against Darius who fled from the battlefield. This caused the Persians to abandon their positions in full rout. The Macedonian cavalry pursued the fleeing Persians for as long as there was light. There was significant carnage after the battle due to the massive, unorganzied retreat and the pursuing Macedonians. Arrian mentions Ptolemy I as saying that Alexander and his bodyguards, while pursuing Darius, came upon a gap which they effortly crossed on the bodies of dead Persians. The battle of Issus was a decisive Macedonian victory and it marked the beginning of the end of Persian power. It was the first time the Persian army had been defeated with Darius present. Darius fled over the Euphrates to safety, leaving his mother, wife and children to be captured. Alexander would defeat Darius again at the Battle of Gaugamela in 331 BC.
The stage is set. The battle lines are drawn and you are in command. The rest is history. 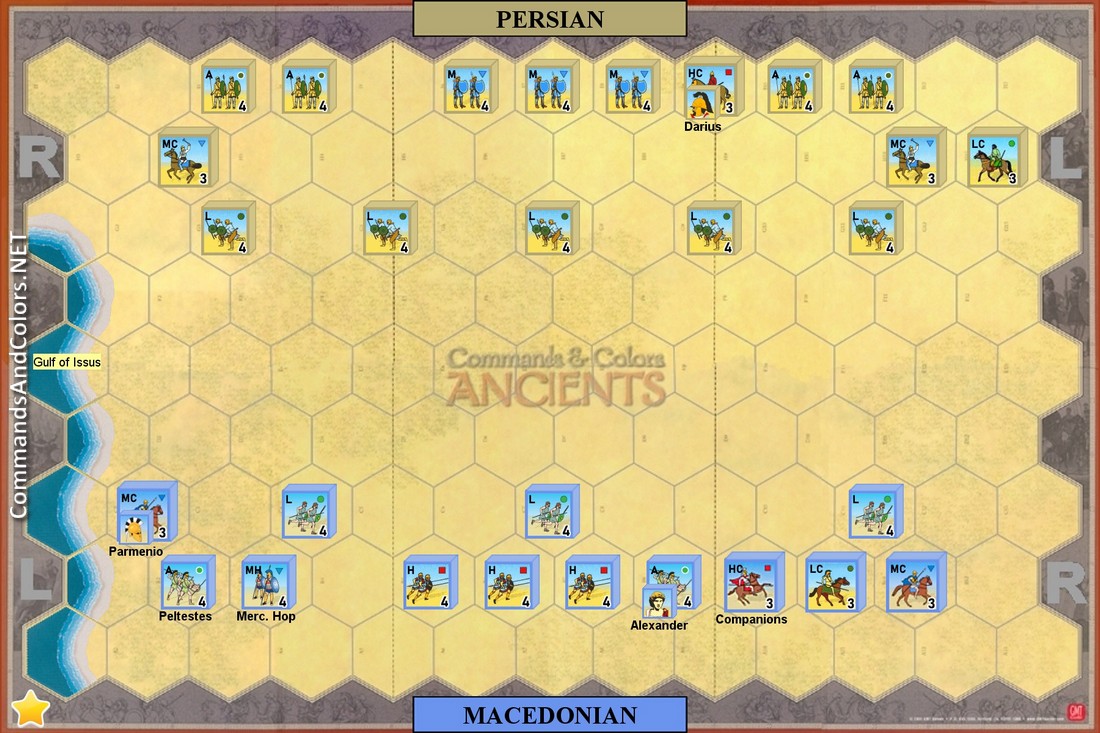