Historical Background
Alexander set out into Asia in 334 BC after he finished consolidating his Greek and Macedonian positions after the death of his father Philip II of Macedon. He crossed the Hellespont from Sestos to Abydos, and advanced up the road to Dascylium, which is the capital of the Satrapy of Phrygia . The various satraps of the Persian empire united and offered battle on the banks of the Granicus River. A Greek mercenary, Memnon of Rhodes suggested a scorched-earth policy of burning the grain and supplies and retreating in front of Alexander, but his suggestion was rejected. According to the extant historian Arrian, the Persians placed their cavalry in front of their infantry, and drew up on the right (east) bank of the river. Alexander's army met them on the third day of may from Abydos. Accounts vary as to whether Alexander immediately attacked, or crossed the river upstream and attack at dawn the next day (as suggested by Alexander's second-in-command, Parmenio). In any case, the Persians had some cavalry that was in contact with the first Greek units to arrive, but Alexander led the elite Companions on an outflanking charge while the Macedonian foot companions covered the rest of the battle column as it formed up against the Persians. The Macedonian line was arrayed with the heavy Phalanxes in the middle, and cavalry on either side. The battle started with a cavalry and light infantry feint from the Macedonian left, from Parmenio's side of the battle line. The Persians heavily reinforced that side, and the feint was driven back, but at that point, Alexander led the horse companions in their classic wedge-shaped charge, and smashed into the center of the Persian line. The Persians countercharged with a squadron of nobles on horse, and accounts show that in the melee, several high-ranking Persian nobles were killed by Alexander himself or his bodyguards, although Alexander was stunned by an axe-blow from a Persian nobleman. Before the noble could deal a death-blow, however, he was himself killed by Cleitus the Black . Alexander quickly recovered. The Macedonian cavalry then turned left and started rolling up the Persian cavalry, which was engaged with the left side of the Macedonian line after a general advance. A hole opened in the recently vacated place in the battle line, and the Macedonian infantry charged through to engage the poor quality Persian infantry in the rear. At this, both flanks of the Persian cavalry retreated, seeing the collapse of the center. The infantry also routed, with many being cut down in the rout. Total casualties for the Macedonians were anywhere between 100 and 200. The Persians had 2000 infantry captured, roughly 1,000 cavalry and 3,000 infantry killed, mostly in the rout. The Battle of Granicus was the closest that Alexander got to death in battle. It announced to the Persians that the Macedonian army was a force to be reckoned with. The immediate effects of the battle were that the Greek cities in Asia Minor were liberated by Alexander, and a beachhead was established so that further campaigns against the Persian empirecould be accomplished.
The stage is set. The battle lines are drawn and you are in command. The rest is history. 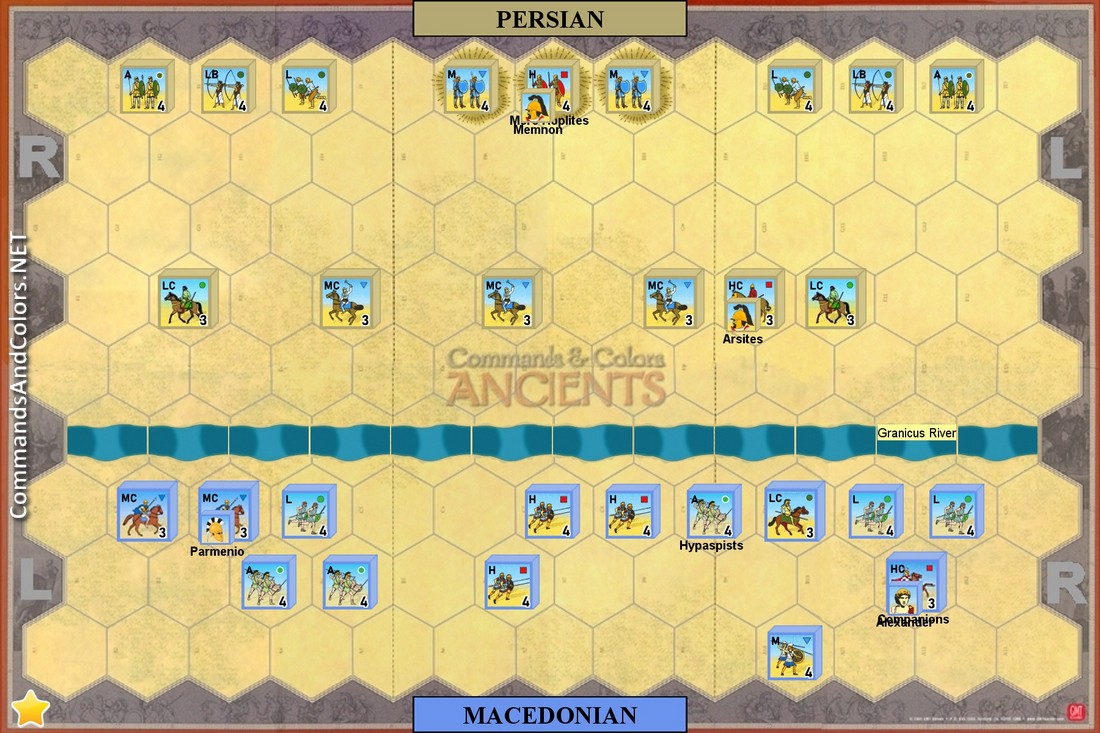 Special Rules
The Granicus is fordable along its entire length.