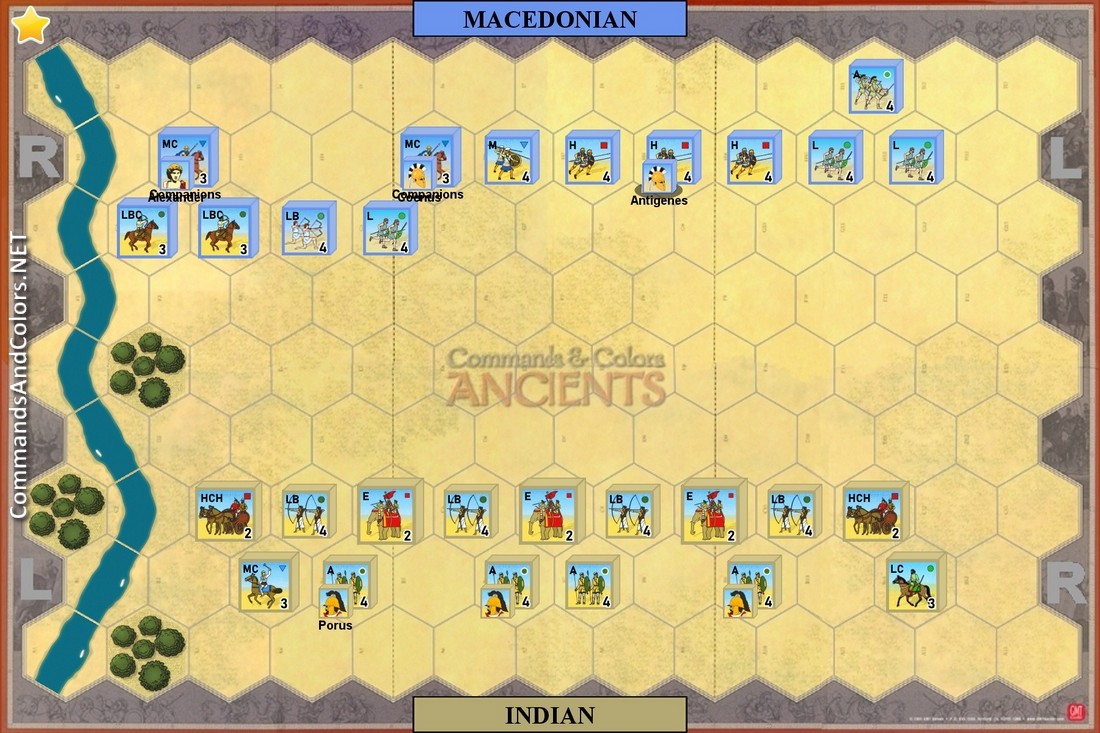 Andygor replied the topic: #4214 10 months 1 week ago
At first glance at the balance of power, it seems that the Macedonians are significantly superior to the Indians in quality. But if you have the right order cards (Cavalry Charge, Darken the sky, Order Light Troops) the situation may not be in favor of the Macedonians.

mk20336 replied the topic: #2311 5 years 1 month ago
Very interesting end of the evening. I like this scenario - there is small hope that with good cards Indians can cause some troubles to Alex. And rightly so - I had two times Order Heavy plus Mounted Charge - you can see below that it was very helpful as majority of battle happened in center of Macedonian phalanx. In the end, Greeks finished game with no leader on the board and heavy loses - 6-3 for elephants owners:

King-Billy replied the topic: #1139 11 years 6 months ago
It has been far to long since we had a gaming session of C&C A. We fixed that today.

The-Admiral replied the topic: #892 12 years 6 months ago
Yes This one does appear a little one sided. Had a quick check of my results and solitaire was 4 games to 0 to Macedon and in a ftf with my brother he won 7-4.

Tuscan-Centurion replied the topic: #877 12 years 6 months ago
As this report shows the flip-flop way of playing a scenario gives both players a taste of each side and in one sided scenarios - victory (hopefully!).
I have to add that this so far is my favorite CCA scenario and can't wait to play it as an EPIC game!

King-Billy replied the topic: #834 12 years 7 months ago
I played this one twice today, as both sides. In both games the Macedonians won, although by different ways.

Bill
alecrespi replied the topic: #375 14 years 2 months ago
Eric S. Raymond wrote some comments about this scenario on his webpage. CLICK HERE to read full article.