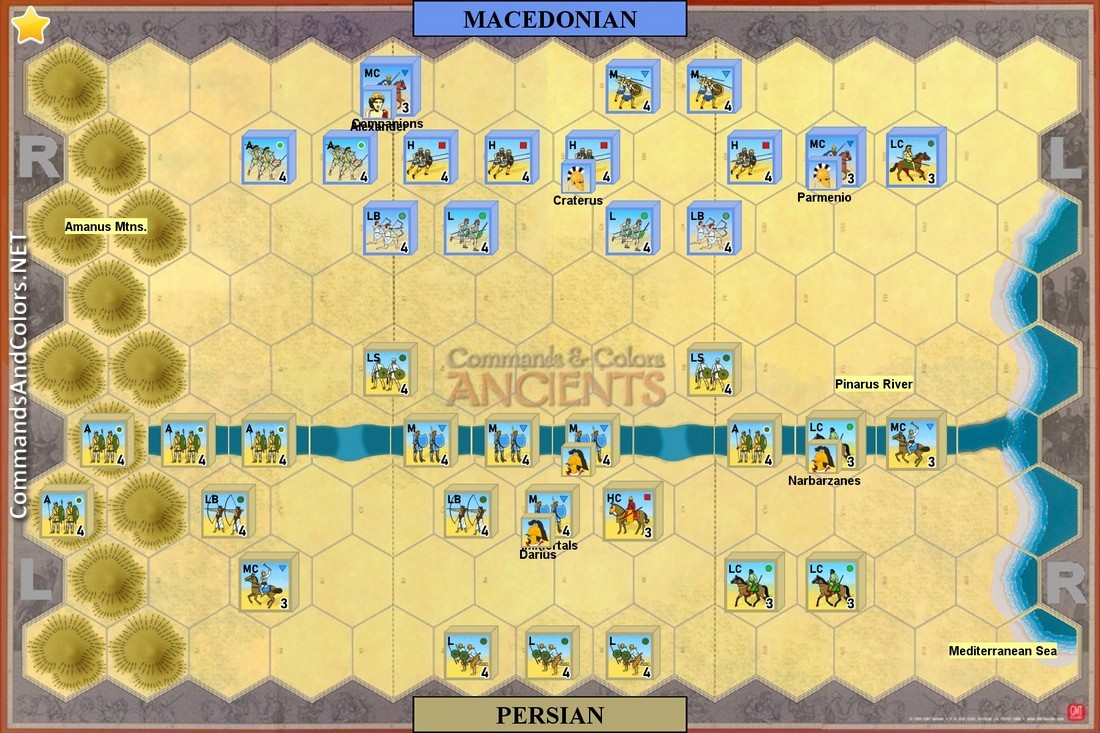 HANJEL replied the topic: #4357 7 months 3 days ago
The position of Pinarus river makes the macedonian to be the defensive army. Although, it is a great battle with a lot of historical flavour thanks to other things.
clavain replied the topic: #4002 1 year 6 months ago
My Persians defeated the Macedonians at Issus, after a hard fought engagement, 8-5. The game started with Alexander and the Companions being a bit brave/brash and coming out to play on the Persian left. While they did some damage, I used a Clash of Shields card to have two Persian Auxiliaries (of the four that came down out of the Amanus Mountains) to beat them down to one point, and Alex ended up retreating. The Macedonian Phalanx then formed up and moved forward, smashing most of the Persian Medium foot in the centre. Darius and the Immortals however counterattacked, taking out some weakened Phalanx units and a Medium foot, while being battered down to one point himself before falling back. The Macedonians continued to press in the centre along with Parmenio's cavalry, and Darius ended up fleeing his destroyed Immortals to the remnants of his Medium foot on the other side of the Pinarus River. However, this opened up gaps in the Macedonian line, and a four-unit (1 Heavy, 2 Medium, 1 Light cav) Mounted Charge smashed into Parmenio and chased down several Macedonian units, pushing them back, while cutting down Alexander's remaining Companions when they tried to evade, leaving him stranded on his own in the Macedonian rear. The Macedonian gambled and moved up his surviving Phalanx units to try to kill the Persian heavy cav, but they successfully evaded. The next turn the Persian cavalry under brave Narparzanes changed history by swooping in to kill Alex, as his last ditch effort to evade off the board failed, while Darius sipped wine from a golden chalice whilst looking on approvingly. All hail our new Persian overlords! Currently planning a big library for the new city of Narparzania.

Warboard replied the topic: #3863 1 year 9 months ago
From Instagram @warboard: 8 to 6 trophies victory for Macedon at Issus 333BC. Very costly and almost a disaster, as the Greeks began the battle by attempting to skirmish and probe against an army half again as large as theirs and massively out matching them in the number of light, fast units. Once the historical attack in the centre using both heavy infantry and cavalry belatedly began, the tide was turned, and not a moment too soon for Macedon. The Persians conducted some inspired and devastating maneuvers, and their troops in the centre fought valiantly, but once the medium infantry was gone, there was no one left who could protect the Great King.

mk20336 replied the topic: #2275 5 years 1 month ago
Long and bloody game. Being Persians I knew I need to attack in open sop where I have cards. It was right wing (when playing Persians I usually attack on left, via mountains). It went initially very well, but then double time hit me in flank. I responded with DT and finally it was fight to the last banner. Good game and Persians (also historically) not without chances for a win!