Historical Background
Alexander succeeded his father in 336 BC, and after securing control of Macedon and the other Greek states, he marched east to challenge the Persian Empire. He crossed the Hellespont into Asia with about 32,000 infantry and 5,100 cavalry. Darius III, emperor of Persia, did not act in time to prevent the crossing and ordered his Satraps (governors) and generals to assemble their forces near the Granicus River. The Persian cavalry were deployed along the bank and the infantry some distance to the rear. Alexander placed his heavy infantry in the center and light infantry and cavalry on the wings. Parmenio command the defensive left and Alexander the overloaded right. The initial Macedonian attack across the river was repulsed. Alexander then led the Companion cavalry in a ferocious assault on the Persian leaders who were now grouped closely together. Mithridates, Darius’ nephew, struck the Macedonian king with a javelin, but Alexander slew him with a sword stroke. Rhoesaces then managed to deliver a blow that split Alexander’s helmet. As Alexander struck Rhoesaces down, Spithradates came from behind and raised his scimitar to finish off the Macedonian king. However, Alexander’s bodyguard Cleitus struck the Persian noble with such power that he severed his arm. The death of these three leaders was too much for the Persian cavalry and they broke and fled. So did the Persian foot. Only the Greek mercenaries held their ground. When they asked for quarter, none was given, and they were butchered almost to the man. Asia Minor was now ripe for Macedonian conquest.
The stage is set. The battle lines are drawn and you are in command. The rest is history. 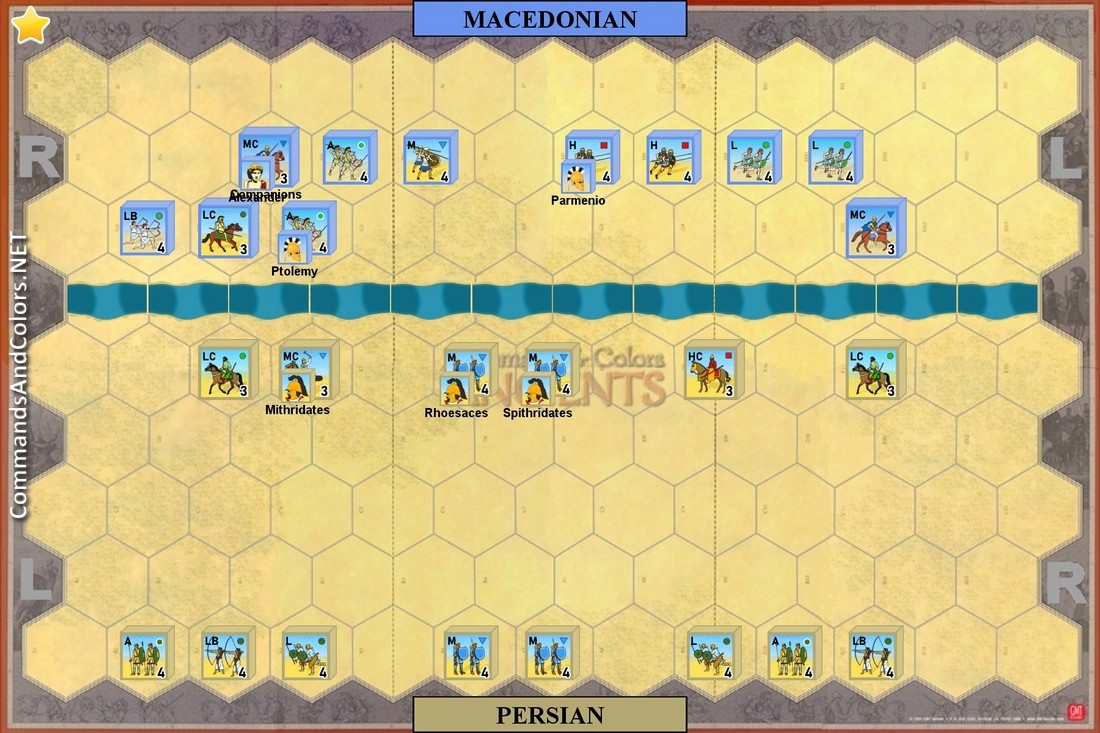 • Poor Persian Leadership: The three Persian satrap leaders (Mithridates, Rhoesaces and Spithridates) will only convert leader symbol results into hits for the units to which they are attached - not adjacent units. A "Leadership" Command card will only order the unit to which a leader is attached, and will not order adjacent units. A satrap leader will, however, normally bolster morale of the unit to which he is attached, so it may ignore 1 flag.

clavain replied the topic: #3963 1 year 3 months ago
There seem to be two errors in the Vassal module and the depiction above for this scenario compared to the Expansion 1 booklet. The MI with Rhoesaces and Spithridates should be MC, and four hill hexes are missing from the Persian side of the battlefield near the two MI on the baseline.
pmiranda-ancients replied the topic: #3255 2 years 6 months ago
Thanks! There's so much content on this website that I sometimes have a bit of trouble navigating it. The answer can actually also be found here:
www.commandsandcolors.net/ancients/the-g...astern-kingdoms.html

g1ul10 replied the topic: #3253 2 years 6 months ago
Yes. This was answered for another scenario involving Alexander and fordable rivers, Gaugamela. See the Ancients FAQ:

www.boardgamegeek.com/filepage/133000/co...cients-collected-faq
pmiranda-ancients replied the topic: #3249 2 years 6 months ago
"When battling an enemy unit on a fordable river hex or a unit on a fordable river hex battling out, both units will roll a maximum of 2 battle dice. A Command card that adds additional dice in battle will modify the maximum number of battle dice that can be rolled."
AND
"When Alexander is attached to a unit, the unit will battle with 1 additional dice in Close Combat."

mk20336 replied the topic: #2274 4 years 9 months ago
One of my more crazy Granicus games. While Macedonian right in normal way went forward (with Alexander) I managed to concentrate enough troops on my right to launch an attack. It finished 6-3 for Alexander, but still it was fun not only to defend!

ner.gif" width="120" height="90" alt="driddle01's Avatar" />
driddle01 replied the topic: #2161 5 years 1 month ago
Excellent game for a night. Went back and forth the whole battle. Alexander started fast and eliminated some Persians with accurate missile fire. The Persians then retreated and waited for the Macedonians to cross the river. They then inflicted some losses. Alexander then crossed and thinned the Persian left flank getting up 5 to 4. On next activation, Alexander charged a Persian Auxiliary with his cavalry. He inflicted a 3 block loss on the Auxiliary, but the Persian battled back, eliminated the cavalry, and then got a leader roll on the leader casualty check, eliminating Alexander for a Persian victory, 6 to 5.
capadotia replied the topic: #1096 11 years 4 months ago
Played this with my son. He as the Macedonians worked mainly to cross with the heavy phalanx. I managed to get the medium foot units up to the hills and was going to defend there against the heavy Macedonian phlanxes but decided instead to attack. Amazingly rolled 4! hits on one heavy unit destroying it and momentum advanced against the second and reduced it by 2 and forced it to retreat back across the river. I had earlier attached a leader from another unit so it was able to do this. Alexander still managed to save the day for the Macedonians with some good luck with the dice. Great game!

religon replied the topic: #965 11 years 11 months ago
Fought this with Macedonians splitting the army down the middle and daring the fragmented central cavalry to cross the Granicus. The Persians were forced to use actions to bolster threatened flanks.

The Macedonians were able to ford the river losing 4 forces (including the Companion Cavalry). Alexander escaped to the Hypaspists. Tied 4-4, but the Phalanxes had crossed the river. An "I am Spartacus" that activated both heavy foot followed by a "Double Time" mopped up the Persian center.

6-4 victory for Alexander. The scenario seems to slightly favor the Macedonians.
eques replied the topic: #577 13 years 4 months ago
Would have thought the Companion Cavalry wopuld be classified as heavy
Read More...