Written by Miguel Marques. Posted in Philip of Macedon (359-338 BC)

Historical Background
Philip II became King of Macedon in 359 BC. After securing the borders to the north, east and west, he began the expansion south into Greece, waging a war against the combined forces of Athens, Thebes and their allies that would end at Chaeronea, his greatest victory. This was the first and only battle where the whole Macedonian Army gathered in full (up to 24,000 phalangites and almost all the cavalry squadrons): four years later Alexander took half of the army to Persia and Antipater kept the other half to secure Macedonian hegemony in Greece. The Greek army held a strong position between the Chaeronea Acropolis and the marshes along the river Cephissus. The Athenian hoplites were on the left, the smaller contingents from other city-states next to them in the center, and the Thebans, including the elite Sacred Band, held the right. Philip formed the Macedonians into an oblique line, a tactic he learnt in Thebes from Epaminondas himself. Opposite the Athenians, and closest to the enemy line, he placed himself and the Hypaspists. The rest of his phalangites stretched to the left and backwards, with light cavalry on the extreme left. Prince Alexander commanded the Companion cavalry, held behind the line in reserve. On contact, Philip withdrew his forces drawing the Athenians forward. The Thebans refused to move from the river bank, opening a gap in the center of the line which Alexander charged through with his Companions, while the rest of the cavalry attacked on the left flank. At the same time, Philip advanced with his phalanx against the disrupted Athenians and broke them. The Thebans, attacked to flank and rear, fought to the last man. Macedon's supremacy over Greece was finally established. The Hellenic Crusade against Persia was just a matter of time. In 335 BC, after the death of Philip, the Thebans revolted heartened by a false rumor that Alexander had been killed. Alexander squashed the revolt and destroyed the city, slaughtering or enslaving all its citizens. Only 27 years after the death of Epaminondas, Thebes was wiped out from the face of the Earth.
The stage is set. The battle lines are drawn and you are in command. The rest is history. 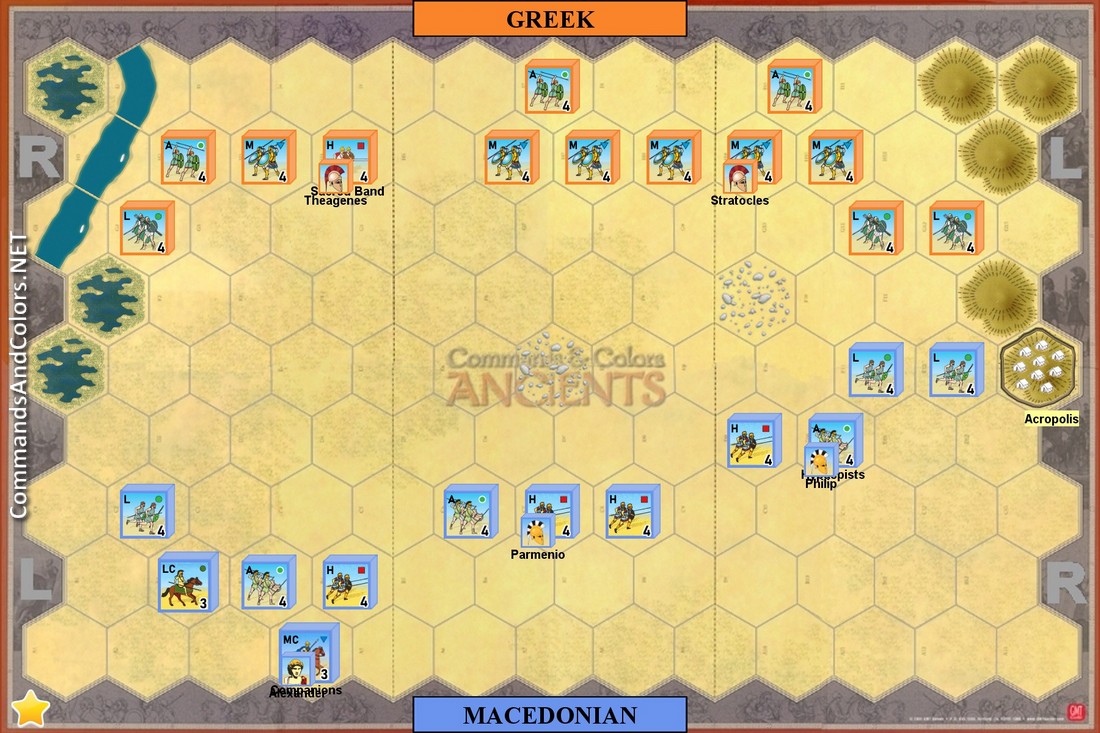 Special Rules
Terrain: the river is fordable and the Acropolis plays as a fortified camp and a hill. Marshes (Exp. #2) play as fordable river plus roll 1 die for symbol hit and stop on exit.

Alexander (use Alexander block): the unit with Alexander battles with 1 additional dice in Close Combat.