Historical Background
The Battle of Chaeronea (338 BC), fought near Chaeronea, in Boeotia, was the greatest victory of Philip II of Macedon. There, Philip (with 32,000 men) defeated the smaller combined forces of Athens and Thebes, securing Macedonian hegemony in Greece. Sparta was part of the Greek alliance against Philip, but no Spartan troops were present at Chaeronea. The battle itself pitted the classical phalanx of the Athenian and Theban allies and the Macedonian phalanx of Philip. The Greek allied battle line formed with the Athenians holding the left wing and the Thebans holding the right wing (with the all-important extreme right flank protected by the Sacred Band). Athenians and Boeotians occupied the center of the line. In the Macedonian line, Philip commanded the right wing, while Alexander commanded the left wing - albeit supervised by the best Commanders of the King. Ancient sources tell us that the two sides fought bitterly for a long time. It would appear that Philip deliberately withdrew his troops on the right wing, in order to break up the Greek lines. Most sources are agreed in saying that Alexander was the first to break into the Theban lines, followed by a courageous band (presumably his kinsmen and friends); upon seeing this, Philip urged his forces to attack with great fury and the Athenians - ardent but untrained - were unable to resist his Macedonian veterans. With the rout of the Athenians, the Thebans were left to fight for themselves and crushed. The famed Sacred Band of Thebes fought to the last man in the defeat. A different account of the battle was advanced by the Alexander historian Nicholas G. L. Hammond which has established itself as the popular version in latter years. He speculated that it was Alexander, in person, who at the head of the Companion cavalry drove into the gap and outflanked the Greek lines. The Greek city-states were decisively defeated and submitted to Macedon, except Sparta. After the battle, Phillip marched through the Peloponnese welcomed by all the cities, but when he reached Sparta they refused him entry. Phillip did not try to take by force the city and left. Sparta was the only Greek city that was not part of the League of Corinth, which was formed in 337 BC, under Macedonian control.
The stage is set. The battle lines are drawn and you are in command. The rest is history. 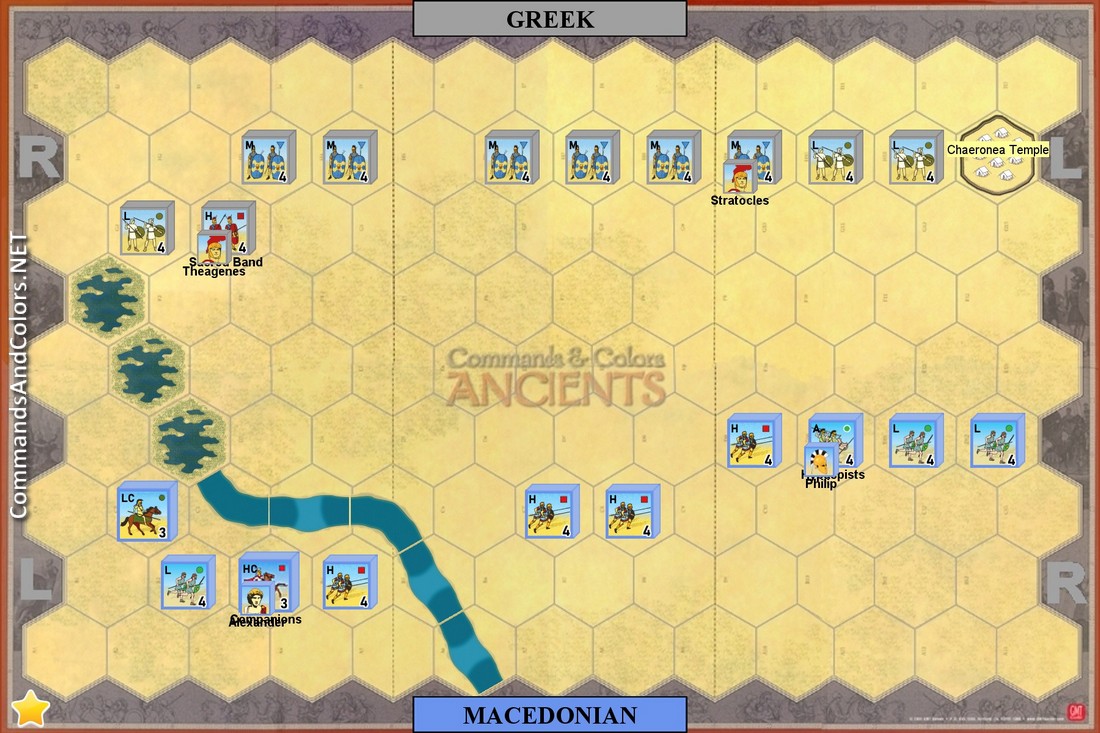 The marsh hexes play as forest, except they do not block line of sight.

The river is fordable along its entire length.