Historical Background
Romes Latin allies resented their treatment as 2nd class citizens and things came to a head when after the 1st Samnite war the Latins went to the aid the Sidicini who were being attacked by the Samnites and to whom the Romans had refused help. As per their treaty the Samnites asked the Romans to call off their Latin allies which Rome duly did, fearing the result of successful independant latin action. The Latin delagation to Rome requested equal rights with Romans. This request was rejected in such a harsh way by the Roman Senate that they actually declared war on Latinum, and the rival legions met at the foot of Mount Vesuvius near the river or town of Veseris.
The Latins, confident after their success against the Samnites, pushed strongly at first, but a combination of the act of devotio by Decius Mus and the late commitment of the Roman Triari into the tireing latins won the day for Rome.
The stage is set. The battle lines are drawn and you are in command. The rest is history. 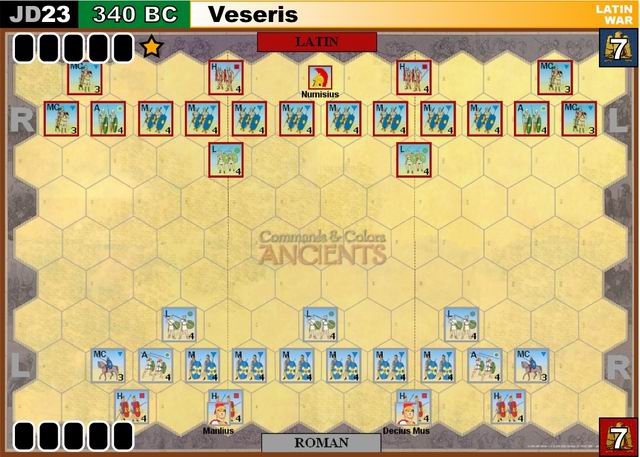 Special Rules
ACT OF DEVOTIO - Once per game if the Roman player starts his/her turn 2 or more banners behind that player may declare the "Act of Devotio". Move 1 leader up to 4 spaces adjacent to an enemy unit and then remove the leader from the board. The Roman player scores 1 banner the rebel player scores nothing. On the subsequent Roman turn all Roman units battling in close combat hit with a leader symbol even without the assistance of a leader. At the end of the turn draw 2 cards. The Roman player now has 6 cards for the rest of the game.