Historical Background
The Samnites were attacking into Campania and the Campanians appealed to Rome for help. Negotiations between Rome and Samnium were rebuffed by the Samnites so Rome declared war. This would become the First Samnite war and would see conflict between these two nations on and off for 53 years until Rome was finally triumphant.
The Roman Consul Marcus Valerius Corvus took an army south and camped near Mount Gaurus West of Neapolis (Naples). He was met by a Samnite army of similar size and a long and determined struggle commenced between the two armies. Valerius finally ordered an all out assault by all his troops which eventually broke the enemy resolve and many of them were slaughtered in their rout before being saved by nightfall.
Further Roman victories at Saticula and Suessula would bring this first war to a close in 341 BC and result in the assimilation of Campania into the growing Roman empire. The peace terms would still allow the Samnites to attack the Sidinici and thus lead to the outbreak of the Latin War in 340 BC (see Battle of Veseris).
The stage is set. The battle lines are drawn and you are in command. The rest is history. 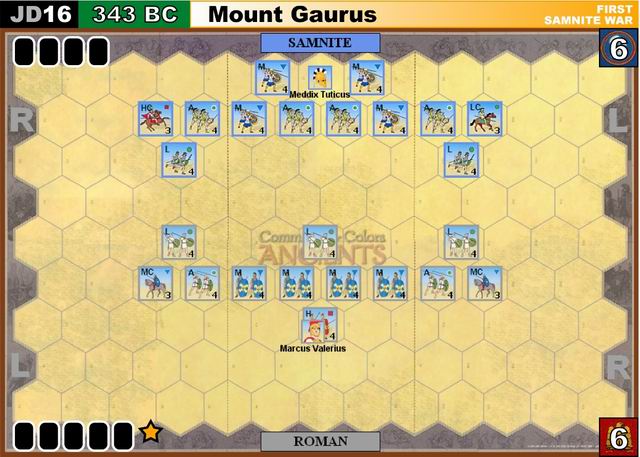 Special Rules
ALL OUT ASSAULT - On any one Roman turn if that player plays a Coordinated attack command two units are ordered from each section rather than the normal one.