Historical Background
After the Pelponnesian war, Spartas' heavy handed treatment of many Greek cities brewed resentment even amoungst their former allies. It took little monetary incentive from the Persians, eager to rid themselves of the troublesome Spartan King Agesilaus, to incite an alliance of Thebes, Argos, Corinth and Athens against Sparta and her allies in what became known as the Corinthian War. Sparta appointed Aristodemus as their commander. Despite the Thebans, in a deep formation, being successful against the Spartan allies, the Spartans crushed the allied Athenian flank and then rolled up the Argives and Corinthians in the centre before finally attacking the Thebans. The allied force broke and fled to the city of Corinth.
The stage is set. The battle lines are drawn and you are in command. The rest is history. 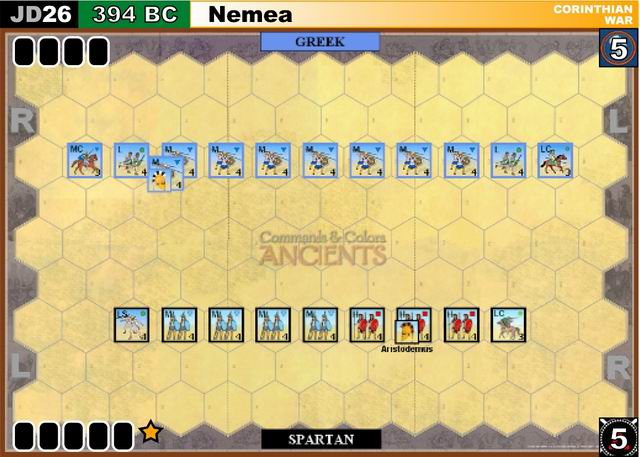 Special Rules
The Medium infantry unit (Theban) in hex G4 has 8 blocks. It is worth two banners if eliminated.