Historical Background
Sparta ordered a reluctant Agesilaus to return from his Persian campaign to help fight in the Corinthian war. He came with a force of seasoned troops including many of Xenophons 10,000. The armies met on the plain of Coronea near the base of Mount Helicon where Agesilaus concealed the news that the Spartan fleet had just been defeated by the Persians and Athenians so as not to affect his mens morale. As at Nemea the Thebans were successful on the Greek right flank but the Argives on their left flank fled to Mount Helicon when attacked by the Spartans. Agesilaus turned his troops to face the Thebans when they threatened his baggage and the Thebans had to fight a bloody clash to escape back to their allies on Mount Helicon. This was a close battle but Agesilaus, who was badly wounded in the fighting, was the victor. The war would continue until 387 BC until the allies had to make peace on Spartan terms due the Persian threat to change sides.
The stage is set. The battle lines are drawn and you are in command. The rest is history. 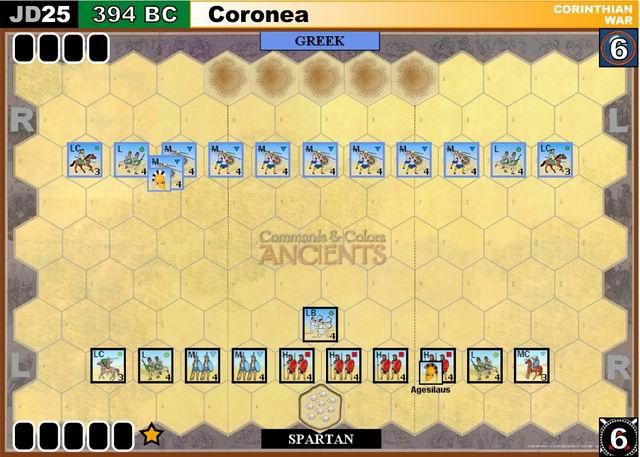 If a Greek unit ends its turn on the Camp that player receives a victory banner (once only).

The Medium infantry unit (Theban) in hex G4 has 8 blocks. It counts as 2 victory banners if eliminated.