Written by Miguel Marques. Posted in Corinthian War (395-387 BC)

Historical Background
Sparta had won the Peloponnesian War with Persian support, but its aggressive policy in both Greece and Asia Minor switched the Persian funding to any other Greek city-state willing to oppose the Spartan expansionism. Thebes was first on the list. Sparta saw a chance to punish the Thebans and launched a campaign against them, who requested support from Athens, Argos and Corinth: the Corinthian War (395-387 BC) had begun. After a first encounter under the walls of Haliartus, in which Lysander was killed, the allies were con¯dent enough to meet the full Spartan army at Nemea in 394 BC. The Thebans led the attack on the right, but the Spartans crushed the Athenian left flank and then rolled up the Argives, Corinthians and Thebans, who broke and fled to Corinth. Unable to force their way past Corinth, the Spartans returned home. The allied army gathered later in the same year near Coronea. Agesilaus was recalled from Ionia, with an army of helots and veterans of the Ten Thousand reinforced by some Spartan regiments and other allies. Facing him on the plain, near the foot of Mount Helicon, the allies took the same places as in Nemea (the Athenians were once more persuaded to face the Spartans) and, as in Nemea, both right wings were victorious, with the Thebans breaking through while the rest of the allies fled to Mount Helicon. Agesilaus assumed the battle was over when news came that the Thebans were at the baggage train, ransacking the loot taken from Asia. He immediately wheeled his phalanx around and headed for the Thebans, that had to fight a bloody clash to escape back to their allies. In the later years of the war, Athens recaptured some islands that had been part of the original Athenian Empire. The Persians, alarmed, stopped backing the allies, forcing them to accept peace on Spartan terms. The victors of the war, however, would be the Thebans, since the many clashes with the Spartans were the perfect training for their forthcoming supremacy over all Greece. One Spartan, returning wounded from Boeotia, said to Agesilaus: Indeed, the Thebans have paid you handsomely for instructing them in the art of war, against their wills.
The stage is set. The battle lines are drawn and you are in command. The rest is history. 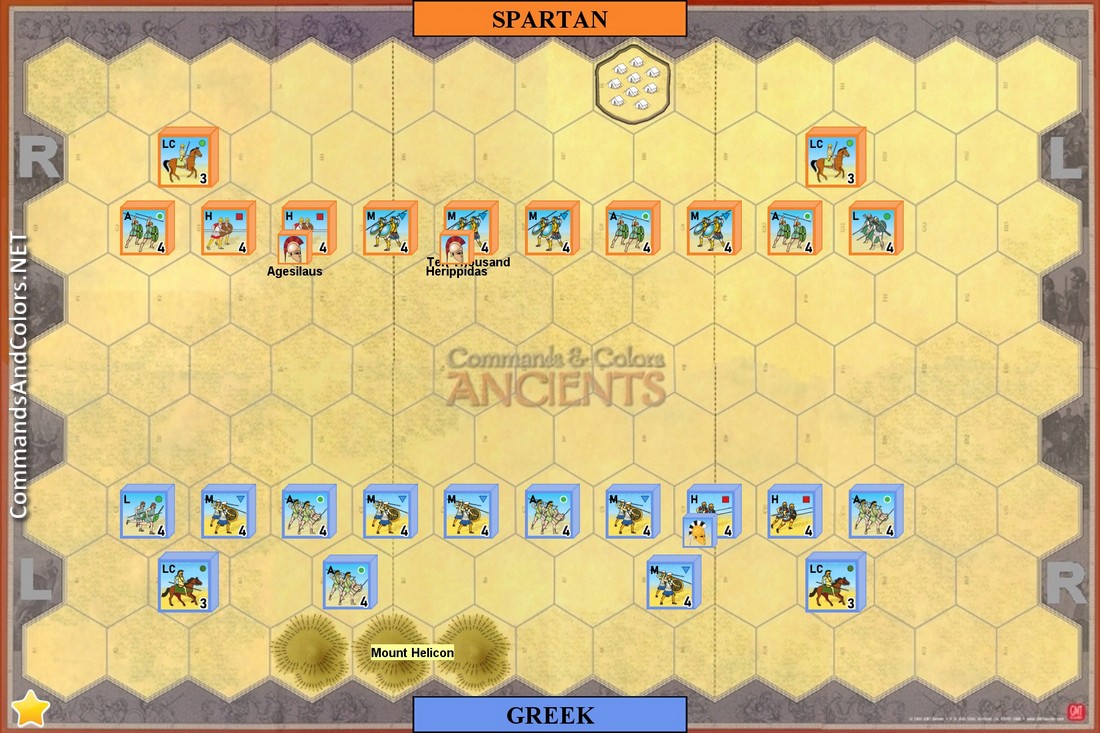 Special Rules
The veterans of Xenophon's Ten Thousand are a special unit. They will ignore 1 sword symbol and may ignore 1 flag.

If a Greek unit begins its turn on the Spartan camp, the Greek earns 1 Banner and removes the camp tile.

The Spartan earns 1 Banner for each Greek unit that flees (moves) to Mount Helicon, as long as it stays on a hill hex.