Historical Background
In 396 BC Sparta sent their King Agesilaus to Ephesus in Asia Minor to free the Ionian Greeks from the Persians. He took with him 2,000 ex-Spartan helots (Neodamodeis), and 6,000 Peloponnesian allies. Once there he recruited local Greeks and the survivors of Xenophon's 10,000. His first campaign ended in failure due to his inferiority in cavalry numbers and quality. During winter in Ephesus Agesilaus recruited and trained a force of about 2,000 horsmen. In the spring of 395 BC Agesilaus felt ready for a new campaign. The Persian commander, Tissaphernes, ignorant of the improved Greek cavalry, believed that Agesilaus would campaign in the cavalry unfriendly mountains of Caria, and he deployed his army, reported by Diodorus as 10,000 horse and 50,000 infantry to that region. When Agesilaus headed for the Persian regional capital of Sardis in Lydia, Tissaphernes had to rush north and was only in time to confront Agesilaus with his cavalry which he probably assumed would be sufficient to delay the Greeks until his infantry arrived. The Persians arrived at Sardis and crossed the River Pactolus to attack a group of forraging Greeks, but they were surprised when they were assaulted by the Greek cavalry supported by peltasts and hoplites. With their backs to the river the Persians were routed and their camp captured. Tissaphernes fled to Sardis and was subsequently beheaded for his failure. Agesilaus, with no siege train and a large Persian army still on its way withrew. He was soon recalled to Greece to help Sparta in the Corinthian War.
The stage is set. The battle lines are drawn and you are in command. Can you change history? 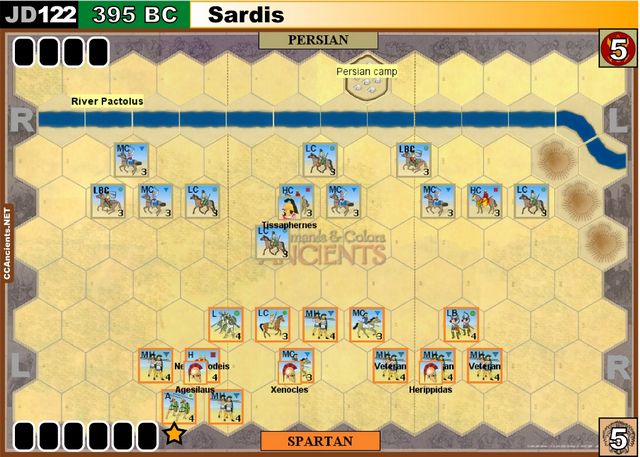 Special Rules
On the first Spartan turn, that player is considered to have played a "Mounted Charge" card. No card is actually played or drawn on that turn.

A Spartan unit that occupies the Persian camp hex at the start of the Spartan player's turn may remove the camp hex and gain one victory banner.

All medium infantry units are considered hoplites and the hoplite infantry rule is in effect.