Historical Background
After the battle of Nemea, Agesilaus was moving south into Boeotia with an army of helots and veterans of the Ten Thousand, reinforced by some Spartan regiments and other allies. The coalition forces lined up to oppose him at Coronea. As at Nemea, both right wings were victorious, with the Thebans on the right breaking through, while the rest of the coalition forces fled to Mount Helicon. Agesilaus, assumed the battle was over when news came that the Thebans were at the baggage train, ransacking the loot taken from Asia. He immediately wheeled his Spartan forces around and headed for the Thebans. The Thebans, seeing that their allies had fled, formed up and attempted to break through the Spartans and join the rest of their army. What followed was one of the worst blood baths in the history of Hoplite battles. In the end, only a few Thebans made it to Mount Helicon..
The stage is set. The battle lines are drawn and you are in command. Can you change history? 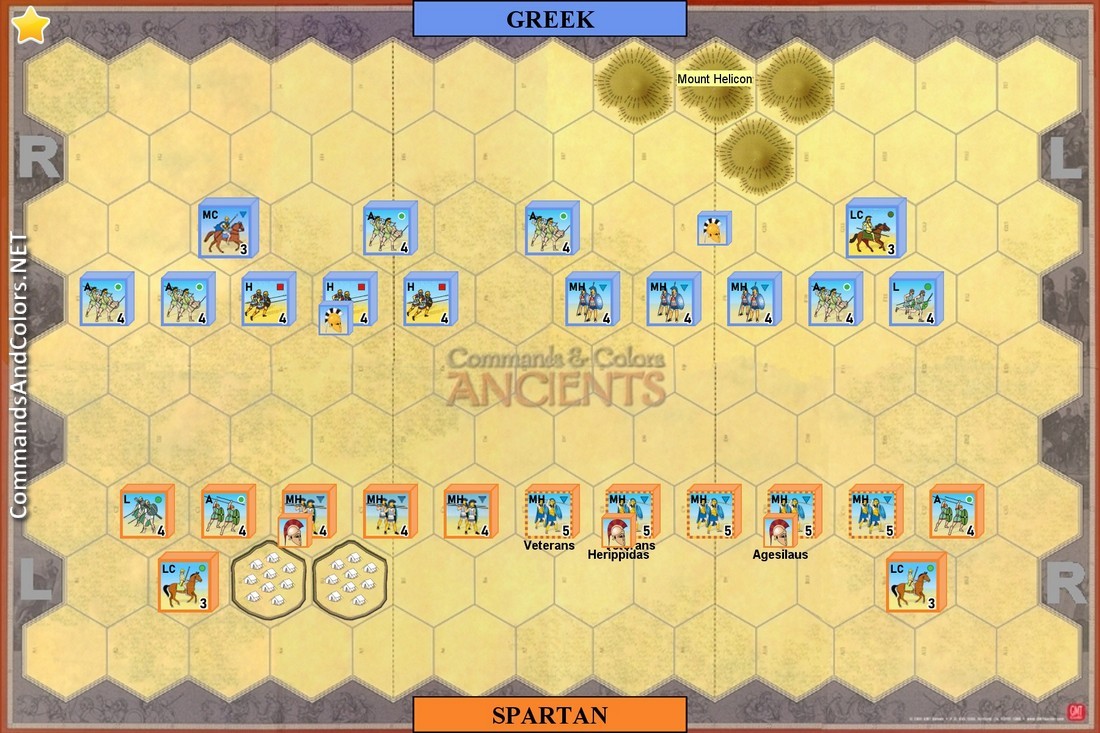 Special Rules
• A light blue block Greek unit that occupies a Spartan camp hex at the start of the Greek player’s turn may remove the camp hex and gain one Victory Banner.

• The veterans of Xenophon’s Ten Thousand are two special units. Place a special block in the same hex as these two units to distinguish them from the other units. These two veteran units, in the same hex or in an adjacent hex to Herippidas, will battle with one additional die.

Big, bloody and interesting. That is how this battle plays. And exactly what happened here - I attacked on right, Marcin on my left and what prevailed was 5-block Spartan units...

Mark-McG replied the topic: #2572 3 years 11 months ago
I'm not sure the two Xenophon units are 5 block Spartan units. In the scenario book, they look the same as the Orange block graphic, and the special rule makes no reference to them having 5 blocks. Am I missing something?
Read More...