Historical Background
After the battle of Cunaxa, the Ten Thousand chose Cheirisophus and Xenophon as leaders. Xenophon led an organized retreat through Carducia and Armenia toward the Black Sea, constantly harassed first by Persian armies and then by local tribes. Using part of his men, Xenophon created a small cavalry force and a body of archers to meet the tactics of the enemy. He reported the whole expedition in his Anabasis. Approaching the River Centrites, Xenophon found that the satrap of Armenia had occupied the far bank. The situation was desperate, but the next morning a better ford higher up the river was found, and to it the Spartans marched. The Carducians followed closely in pursuit. Cheirisophus began to cross, while Xenophon, made a feint to move back to the lower ford. The Armenians responded to the feint, which allowed Cheirisophus to gain a foothold on the other shore. Xenophon retraced his steps and made preparations to follow. The Carducians, saw their opportunity and began to attack the Greeks before they could cross. When most of the troops were over, Xenophon turned and charged the Carducians and they were dispersed. Then, before they could recover, he retired quickly to the river and crossed. Six thousand Greeks reached Trapezus, on the Black Sea. A few years later, Alexander would read the Anabasis and follow Xenophon’s advice: Persia belongs to the man who has the courage to attack it...
The stage is set. The battle lines are drawn and you are in command. Can you change history? 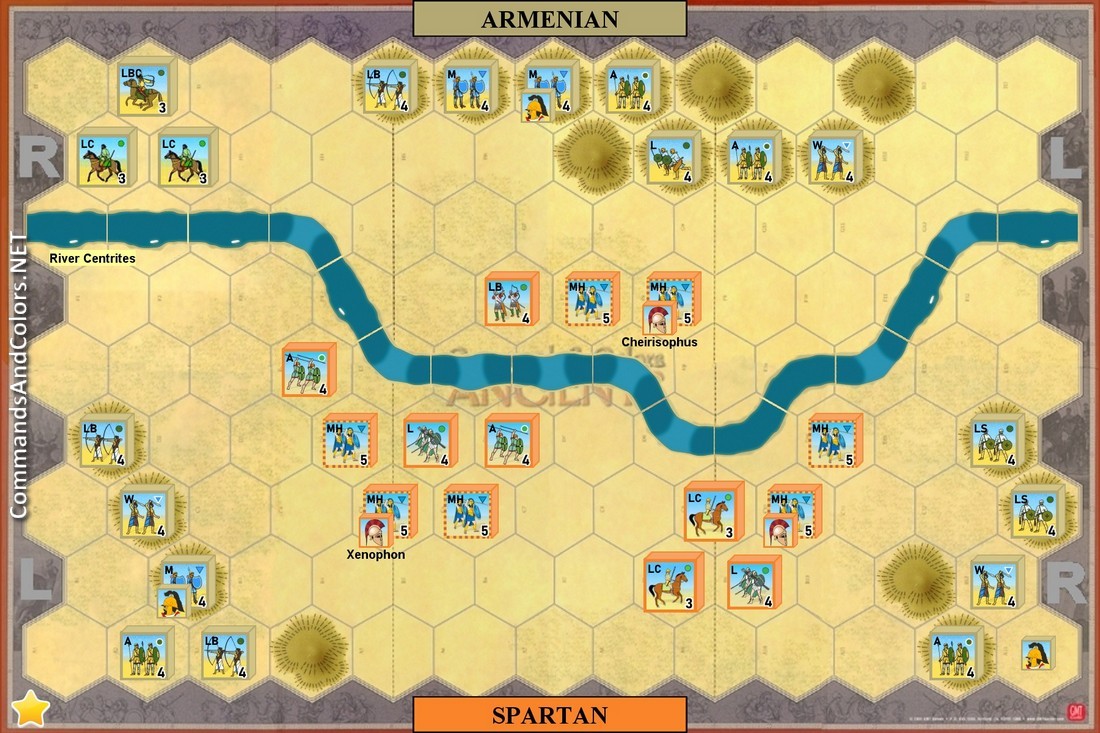 • The River Centrites is impassable except at the fords.

Played recently with stormwalker as part of Spartan Hegemony campaign (10 scenarios, so far 5 played).
This is crazy scenario and so was our game. I was hard pressed in the center and was not able to bring reinforcements who can harass Spartans in enough quantities. Fully deserved win by Marcin.
ozzie replied the topic: #1636 6 years 4 months ago
Played out several times with players changing sides. The unnamed Greek general twice launched an attack on the Carducian troops in the bottom right-hand corner and both times took heavy casualties. The Greeks in the end found it easier to win by just concentrating on destroying enough of the two Carducian forces which forced the Persian side to keep trying to protect these rather than destroying the Greeks on the Armenian side of the river. The Victory Banner total was too generous towards the Greeks. A suggested improvement was for the Greeks to destroy 7 Armenian units thereby forcing the Greeks to concentrate on getting over the river (which was the point of the exercise). This would force the Persian player to put his efforts towards getting the Armenians into position but to still harass with the Carducians to slow Greeks down. Still, a fun and interesting scenario and one we will play again.
Read More...