Historical Background
Following Athens’ defeat in the Peloponnesian War, the victorious Spartans imposed an oligarchic government on the city which became known as the Thirty Tyrants. Late in 404, Thrasybulus, leading a force of Anthenian exiles, gathered at Phyle near Mount Parnes. The Thirty Tyrants, to keep watch on the exiles and prevent them from raiding the countryside, dispatched a Spartan force from Athens. The Spartan force was not expecting any trouble and set up camp. However, Thrasybulus, whose force of exiles had grown in numbers, attacked the Spartan camp. The attack caught the Spartan force in the midst of waking up and a total rout ensued. The defeated Spartans fled back to Athens and the victorious exiles returned to Phyle.
The stage is set. The battle lines are drawn and you are in command. Can you change history? 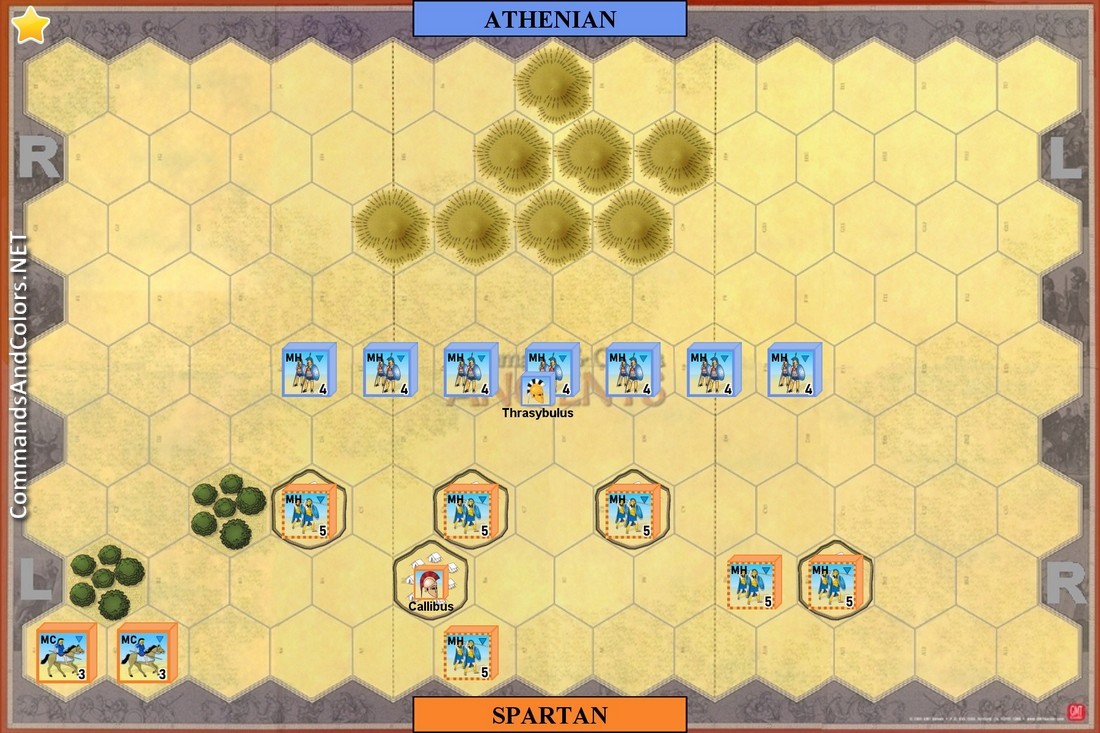 Played recently with stormwalker as part of Spartan Hegemony campaign (10 scenarios, so far 5 played).
The supposedly surprised Spartans were not surprised at all but bad rolls gave me a win.
alecrespi replied the topic: #1313 10 years 6 months ago
Played again with Michael...
this time the game ended after 3 cards (2 of which Athenians).
Michael managed to start with \"Line Command\" card and pursued my units with \"Order Medium\" card.
Spartans (me) did only some Battle Back and the game ended 4-1.
Maybe starting with only 2 cards is too much disadvantageous?
What do you think about it?
alecrespi replied the topic: #1311 10 years 6 months ago
Just played this one with Bayernkini (I was the Spartans).
Considering the 2 card initial setup (for Spartans), the "surprise attack" is recreated very well.
Moreover Athenians attack first.
In addition Bayernkini had some good starting cards (Mounted Charge and Counter attack agains my own Mounted Charge).
The game ended 4-2 for Athenians with a total of 5 cards played.
Really fast but I really enjoyed it.
Read More...