Historical Background
"Sparta had dispatched Clearchus to help Byzantium against hostile Thracian tribes. But this man soon... resembled an independant dictatorship. He had taken advantage of factional strife as an excuse to raise an army of mercenaries, paid for with funds seized from wealthy citizens accused of treason; then... he used this hired force to establish himself as tyrant. We have no record of the size of Clearchus's mercenary corps, but it may have been similar to the one he later led on behalf of the Persian prince Cyrus. If so, there were some 1,000 hoplites along with an equal number of light infantry. The latter would mostly have been Thracian peltasts, yet could also have included a couple of hundred archers from Crete.When the Spartans... learned of this abuse of their authority, they sent... general Panathoedas to rectify the situation by force. Clearchus... relocated westward... to Byzantium's sister city of Selymbria. Shortly thereafter, Panthoedas arrived with... at least 1,000 hoplites (a Spartan mora) and a contingent of light-armed crewmen. Perhaps adding a lochos of hoplites and more skirmishers from Byzantium, the Spartan general then set out for Selymbria.
Clearchus met Panthoedas at a place called Porus. He was an experienced and capable combat commander and must have carefully selected this spot for his stand, its name suggesting a restricted passage. By staking his position in what was probably a narrow stretch between the sea and rough or heavily vegetated inland terrain, Clearchus could negate most of the effects of the greater enemy numbers.... Quantity might not have been able to dominate in this setting, but that just made quality all that more important, and Sparta had the finest spearmen in the Greek world. Fighting and pressing ahead with indomitable fury, these superbly skilled and conditioned warriors seem to have simply outlasted their opponents, breaking down their will to resist and finally driving them into panicked flight. Clearchus escaped to eventually find refuge in Persian-held Ionia."
(Quote is from the book "Land Battles in 5th Century B.C. Greece" by Fred Eugene Ray.)
The stage is set. The battle lines are drawn and you are in command. Can you change history? 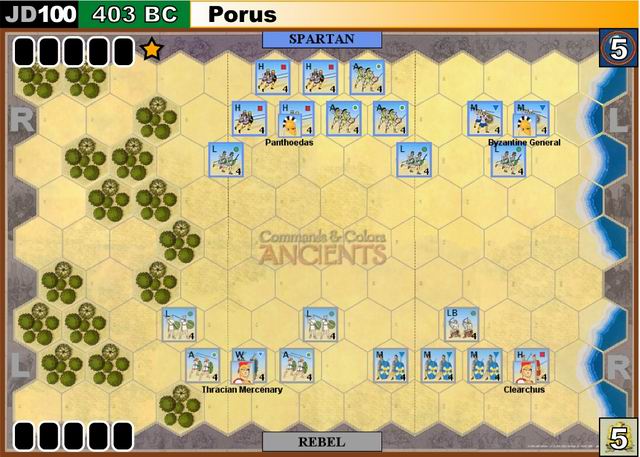