Written by Travis Taliaferro. Posted in The Spartan Hegemony (404-362 BC)

Historical Background
In response to Sparta’s heavy-handed treatment of the Greek city-states since its victory in the wars against Athens, elements within Athens, Corinth, Argos, and Thebes prepared to mobilize against their old Peloponnesian rival, going so far as to even ally with the hated Persians.  After the Thebans then supported their Phocian allies in an invasion of nearby Locris, a Spartan ally, the Lacedaemonian response was predictable.
Two Spartan armies moved immediately against the strategically located Boeotian city of Haliartos, one led by Lysander and one by Pausanias.  However, Pausanias and his force were delayed on their approach through Boeotia, and Lysander decided to move against Haliartos alone.  Although confident he could intimidate the Haliartans into surrendering, Lysander failed to realize the Boeotian Confederacy had both already secured the support of Athens and had intercepted a message from the slow-moving Pausanias, allowing the Thebans to prepare an ambush for the attackers.  As the Spartans and their allies advanced to the walls of Haliartos, they were surprised by a hidden force of Thebans on their left.  In danger of being overrun and annihilated against the city walls, the Spartans took heavy losses totaling near a thousand men, but were able to conduct a fighting retreat to their camp on the nearby hills, despite the death of Lysander.  When the Thebans pursued, they were repulsed with nearly losses of nearly 300 men themselves, and declined to press their advantage any further, content with their victory.
When Pausanias belatedly arrived, he agreed to a truce in order to reclaim the dead, with the stipulation that Spartan forces withdraw from Boeotia.  The first major battle of what would become known as the Corinthian War had been fought, which would eventually lead once again to Persian involvement in Greek affairs and Spartan military supremacy over Hellas.
The stage is set. The battle lines are drawn and you are in command. Can you change history? 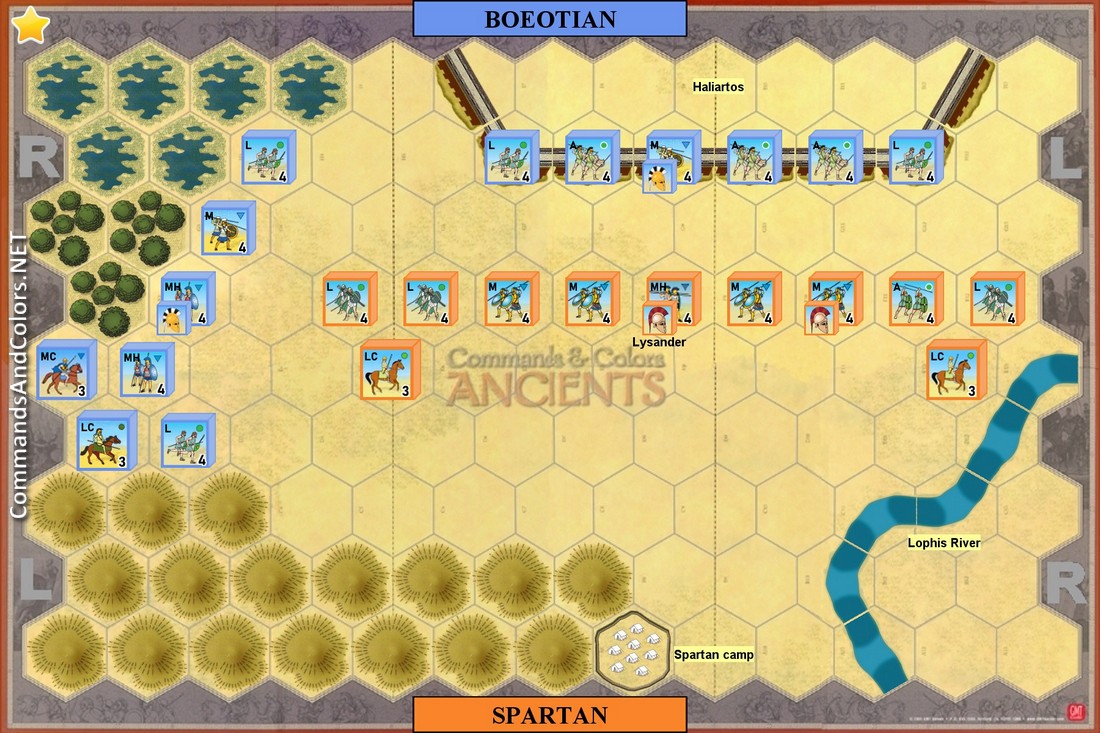 The Lophis River is fordable along its entire length.

Spartan Camp: Historically, the Spartans were able to withdraw to their camp and await reinforcements from Pausanias the following day.  The importance of this camp is reflected by a single victory banner, gained by the control of the  camp at any point in the game.  To control the camp, either player must move a unit onto or through the camp hex.  The camp begins as a Spartan banner, but  may change hands throughout the game.