Historical Background
Upon the death of Darius II, Artaxerxes II was crowned the new Persian King of Kings. This did not sit well with his younger brother, Cyrus, who had won renown campaigning for his father as commander of the western satrapies of Asia Minor. Cyrus recruited an army of 12,000 foot and 2,600 horse from his local troops along with 13,000 Greek mercenaries led by Clearchus. The two armies met on the banks of the Euphates river in Babylon near the village of Cunaxa. Artaxerxes had about 30,000 foot, 6,000 horse and a large number of scythed chariots with which he hoped to counter the Greek hoplites. The battle started with an inefectual chariot charge against the Greeks, who then proceeded to sweep away the Persain left flank. In the Centre, Cyrus charged Artexerxes with his 600 "Table Companions", but as he was about to kill his brother he himself was slain by a javelin in the face. Cyrus's late arriving left flank, seeing their leaders demise, slunk away, and the Greeks, beleiving the battle won returned to their camp which had been plundered during the battle. After the battle the Greeks entered into negtiations with the Persians for their safe passage home, during which Tissaphernes had four Generals (including Clearchus) and 26 captains executed. The Greeks elected new leader, and, as detailed in Xenophon's famous "March of the 10.000" they travelled over 1000 miles back to Greece where they found gainful employment with the Spartan king Agesilaus in his campaigns against the Persians.
The stage is set. The battle lines are drawn and you are in command. The rest is history. 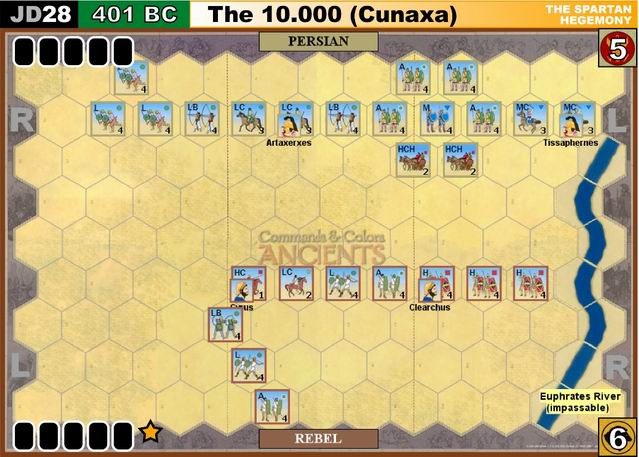 
Special Rules
The Rebel Heavy cavalry unit has only one block and the Rebel light cavalry has only two blocks. Both must be eliminted for the Persians to claim a banner. These units may not be rallied above their starting strength.