Historical Background
“Now that the Arcadians were no longer concerned with Cromnus (where they had defeated the Spartans in a siege), they again turned their attention to the Eleans. They put a stronger garrison into Olympia and, since an Olympic year was coming on, prepared to celebrate the Olympic Games together with the Pisatans, who claim to have been the first people to have had charge of the holy place. But when the month of the Olympic Games came round and the days had arrived when the great assembly gathers, who would appear but the Eleans? They had made their preparations openly; they had called on the Achaeans to help them; and now they came marching along the road to Olympia. As for the Arcadians, they and the Pisatans were busy organizing the festal gathering, having no idea that the Eleans would march against them. They had already held the horse-race and the first four events of the pentathlon. The competitors who had got as far as the wrestling event had left the racecourse and were now wrestling in the space between it and the altar.”

“By this time the Eleans in fighting order had already reached the sacred precinct. As for the Arcadians, they did not go forward to meet them; instead, they formed into line along the river Cladaus…They had allies, too, to back them up-about two thousand hoplites from Argos, and about four hundred Athenian cavalry. And now the Eleans formed up their line on the other side of the river, made their sacrifices, and at once moved forward into action. Before this time they (the Eleans) had been looked down on as soldiers by the Arcadians and Argives, and also by the Achaeans and the Athenians. However, on this day they led their allies into battle as though they were the bravest men alive; the Arcadians were the ones they met first and they routed them at once; they then stood firm against the Argives, who came up in support, and were victorious over these too. They then drove the enemy back to the space between the Council House and the Temple of Hestia and the theatre nearby, fighting as bravely as ever and pushing the enemy back towards the altar. However, stones and weapons were raining down on them from the roofs of the porticos, the Council House, and the Temple of Zeus, while they themselves were fighting on ground level; some of them were killed, and among these was Stratolas himself (an Elean oligarchic political leader), the commander of the Three Hundred (a socially upper-class Elean political/military faction). After this they (the Eleans) retired to their own camp. But the Arcadians and their allies were so terrified of what the next day might bring that they never even rested during the night, spending the time demolishing the splendid pavilions that had been built (for the Games) and using the material for constructing a stockade.”

“As for the Eleans, they advanced again the next day, but when they saw the strength of the stockade and the numbers of men who climbed up to the roofs of the temple, they withdrew to their own city. The courage that they had shown in battle was no doubt something which a god by his inspiration could produce in a day, but it would take human beings a very long time to produce such a quality in men who were not naturally brave already.”

(The Selection below is from Xenophon’s ‘History of My Times’ (or Hellenica) Book VII Chapter 4- Xenophon apparently wrote this particular part of the work in circa 360 BC or later—a few years after the events described. It is believed he died shortly thereafter--perhaps sometime in the late 350s decade BC). 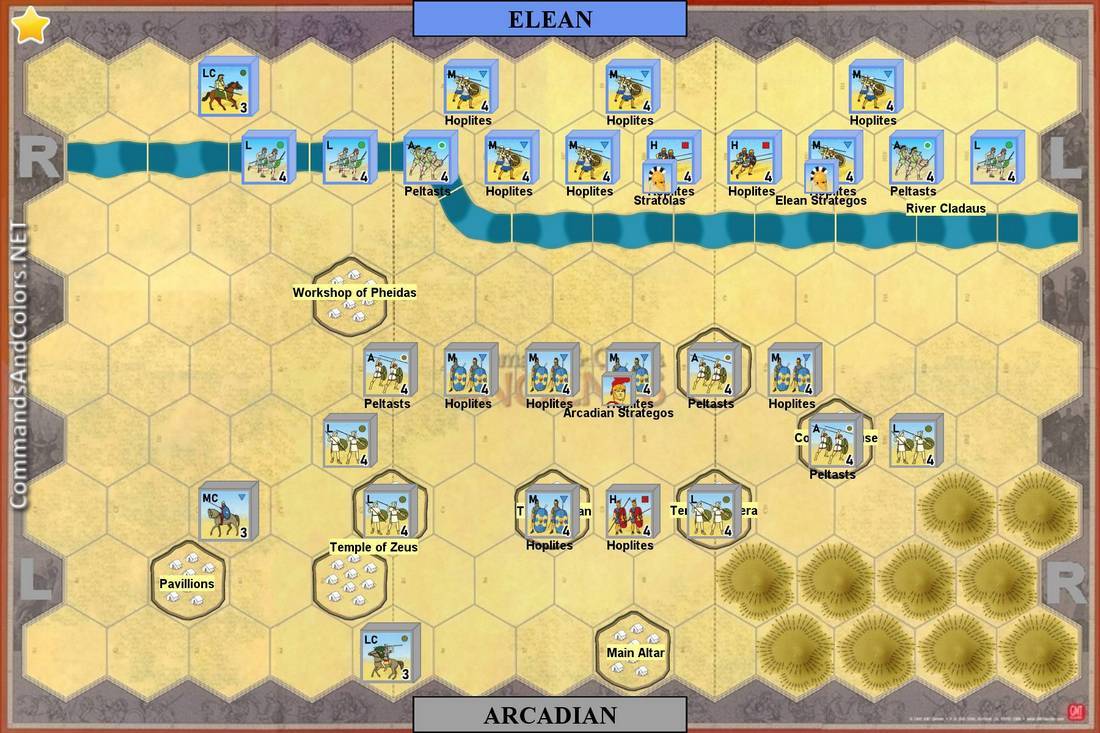 Victory
Victory for the Arcadian/Allied side is 6 Banners scored in the usual way.
Victory for the Elean side is 10 Banners scored in the usual way and additionally the Eleans get one Banner for each Public Building/Temple, Camp/ pavilions, or Main Altar hex wherein an Elean unit was the last to enter that objective hex the Eleans can lose Banners if the hex initially captured is retaken/re-entered by an enemy unit. Once the Banner is lost by the Eleans in a recapture of an objective hex it cannot be regained for the same hex even if the objective hex in question comes back under Elean control via Elean unit re-entry. Note that there are a total of nine objective hexes on the map for the Eleans (x7 Public Building/Temples, x1 Main Altar, and x1 Camp/ Pavilions).

Special Rule
Command:
A Leader attached (stacked with) a friendly unit may cancel one sword hit on the unit in lieu of canceling a retreat hit. A unit involved in close combat with the support of a Leader may only count one helmet hit amongst those rolled to inflict a hit on an opposing unit.

Special Troop Rules:
Hoplites: Both sides Heavy and Medium Infantry are assumed to be heavily armed and armored Greek warfare fighting style Hoplites—therefore such units always ignore the first sword hit inflicted upon them. Hoplites in this scenario—due to the small scale of this battle, may move two hexes and not battle (like Auxillia or Julian Legions rules) when normally ordered with any applicable card save a Double Time or Line Command. Note that Hoplite units gain no direct combat advantage for themselves when defending in Public Buildings/Temples hexes.

Peltasts: All Auxillia in the game are assumed to be Peltasts—therefore they are allowed to evade per the normal rules if attacked by Enemy Heavy or Medium Infantry only in close combat. Treat as normal Auxillia otherwise.
Athenian Cavalry & Light Cavalry: The Arcadian/Allied Medium Cavalry unit may missile fire if ordered, and only retreats 2 hexes per flag result taken or inflicted upon it. Light Cavalry on both sides’ only retreat 3 hexes per flag result taken or inflicted.

Terrain Special Rules:
“River Cladaus” Fordable River: The River is assumed to be not much of an obstacle—therefore its hextiles do not inhibit movement in any way. Its only combat effect is to reduce by one dice the ‘normal’ number rolled by a unit located in such hexes that is close-combat attacking/battling back out of a river hex. Units not on a river hex involved in a close-combat/battle-back into a river hex suffer no penalty whatsoever.

Hills: Use normal rulebook rules, however no close-combat/ battle-back may take place in either direction between Hill hex B9 and the adjacent “Temple of Hera” hex (hex C9).

Main Altar & Camp/ Pavilions: A Unit battling back only from the Main Altar does so with one extra dice. All Close-Combat attacks (but not battle-backs) into the Main Altar hex are at one dice less than ‘normal’. A unit defending on the Altar hex can also ignore one retreat flag. The Main Altar hex blocks the line of sight. The Altar does not inhibit movement
The Camp/Pavilions is not fortified—the only combat effect the camp has is to block line of sight. The Camp/ Pavilions does not inhibit movement.

Final Rules Note: The standard ‘outflanking’ rule used in many of my other scenarios is not used for this particular fight due to both the rather small scale of the battle and the general character of the combat among the buildings and temples of Olympia.