Historical Background
The Persian King Darius II died in 404 BC and was succeeded by his eldest son, Artaxerxes II. His younger brother, Cyrus, had helped the Spartans against the Athenians in the Peloponnesian War, which ended in the victory for the Spartans in 404 BC. Cyrus now used these Spartan alliances to begin recruiting a combined Greek and Persian army to march against his brother. Approaching Babylon, when a seer told Cyrus that the King wouldn't fight within ten days, Cyrus said: "then he won't fight at all". He was wrong. Artaxerxes' army suddenly appeared at Cunaxa, 70 km north of Babylon. Cyrus was caught by surprise and forced to deploy his troops in a hurry. Both armies deployed against the Euphrates river, but the King's forces outnumbered his brother's considerably and his center overlapped Cyrus' left. The Spartan general Clearchus charged straight ahead. The scythed chariots stationed in front rushed about, and the Persian infantry facing the Greeks broke and run. Unlike the battle of Marathon, where the Greeks stopped and turned to attack the Persian centre, they kept up their pursuit. Tissaphernes, on their right, broke through the facing peltasts and headed for the Greek camp, avoiding contact with the hoplites. Artaxerxes, with no enemy to oppose him, wheeled round to threaten Cyrus' flank. Cyrus, fearing he might get cut up the Greeks, charged. With his 600 he routed the 6,000 men posted in front of Artaxerxes, and without waiting to reform his cavalry he charged at the King himself, followed by his Table Companions, crying "I see the man!". Cyrus gave Artaxerxes a slight wound, but at the same time he was struck in the eye by a javelin, which killed him. The battle was over. Few days later, Clearchus and the other Greek Generals were treacherously seized by Tissaphernes and executed. Trapped deep in the Persian Empire, the Ten Thousand Greeks fought their way back home under Xenophon's command, who reported the story in his Anabasis.
The stage is set. The battle lines are drawn and you are in command. The rest is history. 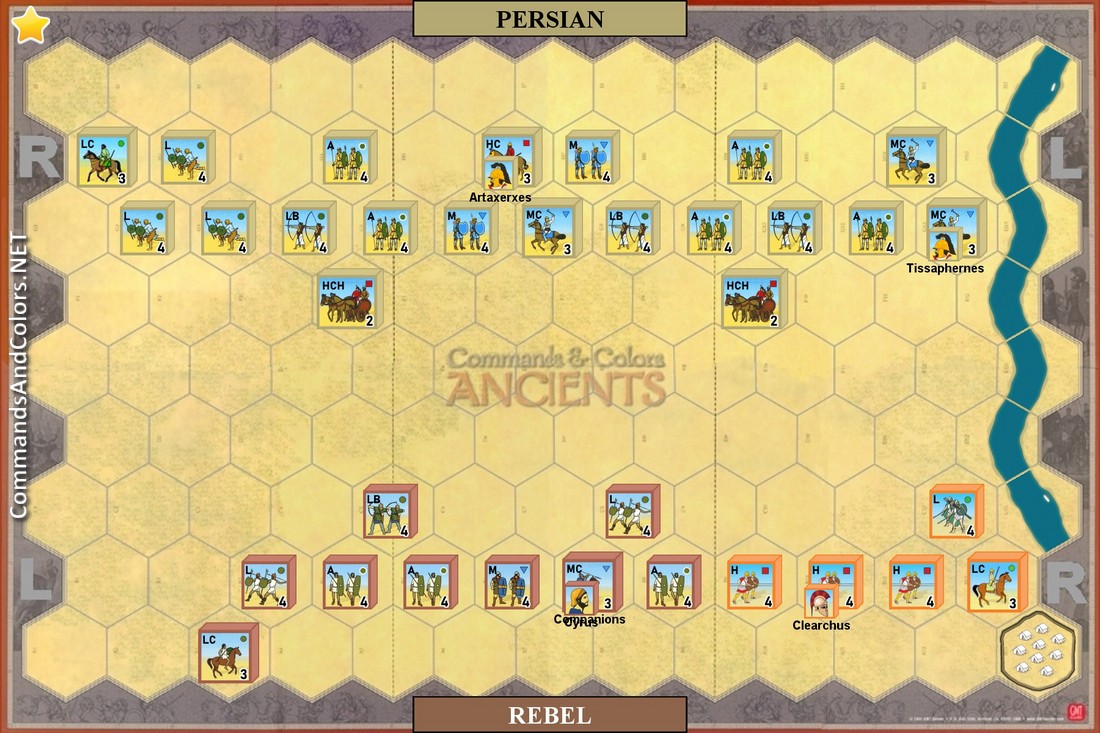 Special Rules
Table Companions: they are a special unit, that will ignore 1 sword symbol and may ignore 1 °ag, only if Cyrus is attached to them.

Greek Camp: if a Persian unit begins its turn on the camp, the Persian earns 1 Banner and removes the camp tile.

ozzie replied the topic: #1638 5 years 4 months ago
Cyrus overcame his brother in 3 out of 4 games of this scenario but was killed in every game. Clearchus got killed twice but his Hoplites broke through mostly and spitted Persians left, right and centre, scoring several Banners by retreating Persians off the board. The single victory for Artaxerxes was with an all-out onslaught on Cyrus and his weaker left flank, whilst avoiding the hoplites as much as possible. It was helped by Cyrus having a cursed hand with few right-flank movement cards in the game and Artaxerxes twice getting Darken-The-Skies allowing him to blow away several weaker light and auxilia units and even take down some of Cyrus' guard cavalry. We modified the rules for the scythe chariots as these ''wonder weapons" were poor historical performers. We treated them similar to elephants and that as long as the chariots moved into combat they had the same number of combat dice as their opponents thereby making them historically vulnerable to light infantry. If they retreated then then they rolled two dice for any unit they contacted and then vapourised. In defence (i.e. if contacted by an enemy unit first they could not play a First-Strike card and they were hit on any red or sword roll and could only defend themselves with a maximum of 2 dice. This proved a much better representation of their historical performance. Fun scenario.
Read More...